I really don't want to get my hopes up.. Years of bad NASCAR games have ruined me.

2016 Kentucky repave will not be in the game. It wasn't completed in time for release.

Meh, I said my part about this. Once it comes out, I'll acquire a copy (re: take one for the team) and see what it has, along with a full pro-neutral-con list for those who are wary. Hell, I'll even roll with a wheel and a controller, so that I can be as comprehensive as possible.

I want this game to be good, I want it to live up to what is expected of it. However, I'm old enough not to be duped so easily. We shall see when September comes around whether or not it's a viable game, or simply more garbage like the Eutechnyx trash.

The problem with any sort of expectations with this game is that it hasn't come out yet. People want to make sweeping declarations both good and bad about a product we haven't played yet. If you're an adult, or hell even if you're a kid, how you spend your money is your responsibility and yours only. If you're skeptical, wait for reviews, details, and videos of the finished product, or perhaps rent it instead of shelling out the cash to buy the game day one. If you're already sold, buy it, but if you end up being disappointed, it's still your choice to spend the money.

There are a couple of issues with the discussion of this game. One, I don't subscribe to the theory that we should feel "lucky" just to have a NASCAR game. In my opinion, that type of mentality and lack of accountability is why ETX and even EA towards the end was why they were able to get away with putting out the poor quality products they produced. They knew there would be enough people that would say "At least it's a NASCAR game." and buy it anyway. At the end of the day if the game is unplayable, that's not really better than not having a game. Don't buy bad products and companies will have incentive to make it better if they wish to turn a profit. Until then you will continue to get cash grab quality and nothing more.

The other issue is, this may be Sim Racing Design, but I think it would be disingenuous to pretend this isn't an NR2003 first forum. There's absolutely nothing wrong with that. NR2003 was and still is a great game. But because of this, there is always going to be a portion of the users on this site that will never mentally allow themselves to perceive anything as being better or anywhere near as good as NR2003 regardless of product quality. It's like Dale Earnhardt in NASCAR. Someone could win 200 straight races and 9 championships and in their mind he or she still can't touch Dale. I'm not saying you shouldn't discuss the game on here. There are plenty of open and rational people looking for the next big thing in NASCAR video games. I'm just saying that some of the criticisms should be taken with a grain of salt because some people will never be satisfied with anything that isn't NR2016.

It's far too early to tell how valid the praise or criticism is at this point. Be smart, do your research, and spend your money wisely. You dropping 60? bucks on a game, be it good or bad, is entirely on you.
Last edited: Jul 7, 2016

Edit: woops didnt see above me
I

I think J.J. Abrams took this picture. Look at that fucking lens flare.

Anyways, back on topic, the damage looks good.

What are all those scratches about on Danica? My goodness.

You can see damage in the first pic on Elliott, Kurt Busch, and Aric Almirola

The detailing on these tracks is off the charts!

J.R.Franklin said:
The detailing on these tracks is off the charts!
Click to expand... 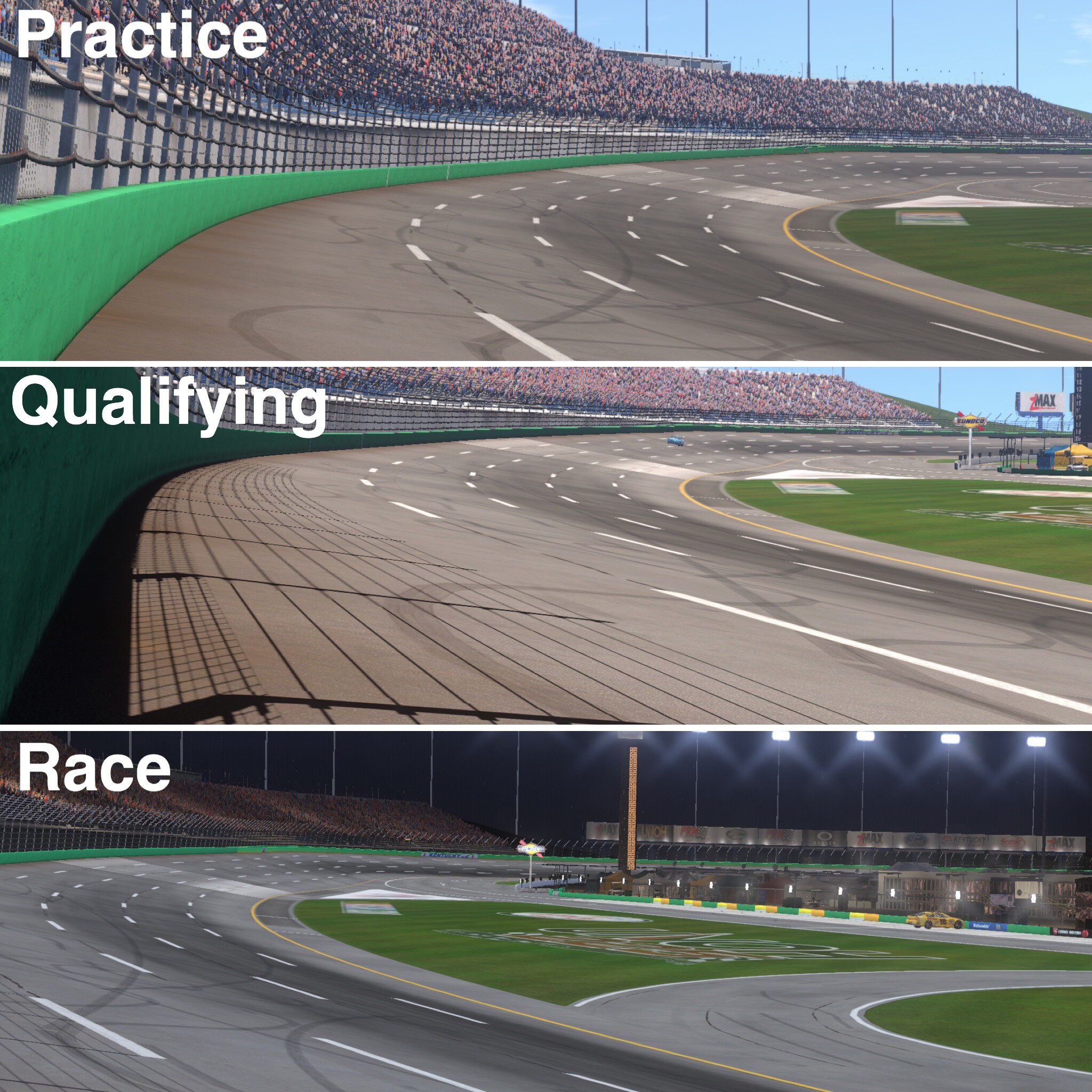 "Practice, Qualifying, and the Race will all happen on time (with the right lighting) in #NASCARHeat Evolution."

XxTeam48LowesXx said:
"Practice, Qualifying, and the Race will all happen on time (with the right lighting) in #NASCARHeat Evolution."
Click to expand...

But ... what if there is a rain delay? It won't happen on time. This game is not realistic enough, 0/10 and cancel pre-order. /s

Car models look good. Track details as @J.R.Franklin mentioned is fantastic. I still don't like their daylight system they are using though.

Was it announced that they will, or won't be supporting wheels?

Wildling said:
Car models look good. Track details as @J.R.Franklin mentioned is fantastic. I still don't like their daylight system they are using though.

Was it announced that they will, or won't be supporting wheels?
Click to expand...

David24 said:
Graphics do look pretty decent but the cars still look like they have a lift kit
Click to expand...