The place for all the random work I feel like showing off, mostly from my own universe. Prepare for a lot of 90's. And a lot of using CarViewer because of my laziness.

Kevin Caldwell is a very fast young American driver. His one major flaw? He is very aggressive and crashes a lot. Despite a very subpar 1994, GL Gamossi Racing retained KC for the 1995 season. So far, it has gone well. Kevin got his first win at Road America, and is currently 9th in points with two races to go. His efforts have elevated the team, and it looks like he will retain this seat in hopes of further improving for 1996. I've always loved these Valvoline liveries, and despite this one being a pain in the ass, I'm pretty god damn satisfied. What's 90's indy cars without some really frickin sick Target liveries? This one belongs to Tony Goodwin. Tony is a promising young American driving his first season for Bernard Page Racing. He had a pretty impressive 1994 driving for an underfunded team, highlighted by finishing 5th in the Indy 500. Though winless and suffering an injury from a crash whilst battling for the lead at Road America, Tony has shown a lot of speed throughout the season. Aldo Barros looked to be a real hot shot rookie when the season started, finishing 6th in the season opener at Milwaukee. Since then however, this Brazilian has really been underperforming. With only one other points finish in the season, Barros sits 27th in points with two races to go. Seems pretty unlikely he will have a full time ride for 1996. The same cannot be said for fellow Brazilian driver Gabriel Goncalvez. Many people questioned legendary owner-driver Richard Cohen when he hired Gabby at the beginning of the season after a pretty dismal rookie year in 1994. However, Gabby proved all the critics wrong. He's been pretty consistent throughout the season, with one pole and a current 8th place in the points. Looks like some top teams will be knocking at his door soon enough. Canadian Danny Doucet has already clinched the 1995 championship with two races still remaining, and he certainly deserved it. 6 wins including the Indianapolis 500, 2 poles, 14 points finishes, and an average finish position of 5.25. No matter how these last two races turn out, it has certainly been one of the most dominating performances in recent memory. Love the worldbuilding. The schemes look damn good too.

Thanks! Not too hard to world build when this project of mine has been going on for 3 years, within which I've been able to run 6 seasons. World just builds itself at this point, which is just awesome. Just finally and randomly got the urge to show some of it off

In perhaps my most blatant showings of uncreativity in building narratives, I just had to have a Marlboro team and some Menards. Wouldn't be 90's IndyCar without them.

Outside of having the sexy iconic livery since the 70's, I always wondered why Marlboro never advertised other brands. While there is a famous red-and-white Marlboro car in my roster, that wouldn't be as fun to show off. So here's the second Marlboro car: The Marlboro Lights Mercedes driven by Glen Lucy (did I say uncreative? Albeit I blame the name and idea on the game IndyCar Series). Glen has had a pretty good 1995, scoring 4 wins, 4 poles, and is poised to finish 2nd in the championship. 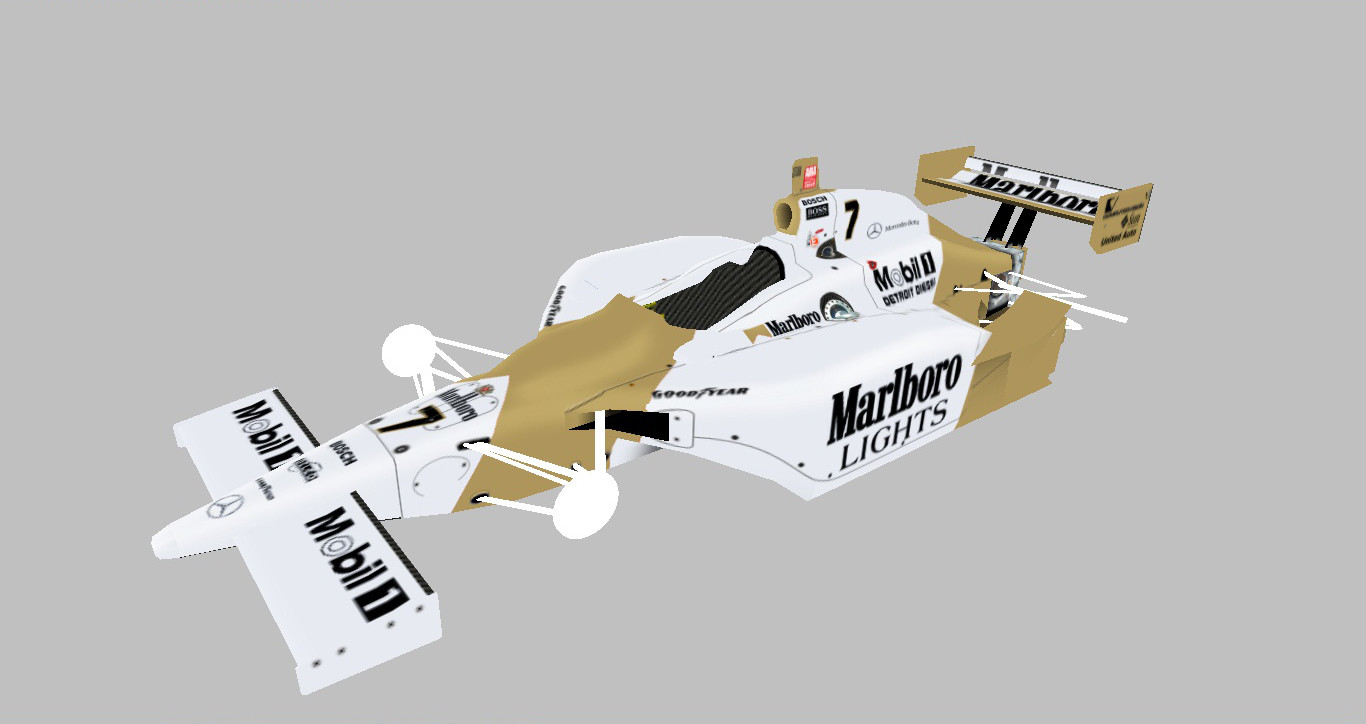 And one (of three) of the Menards one-offs for the 500. This particular Menard was driven by Robin Koendyke (yeah, still fairly uncreative), a long time IndyCar stalwart. Robin had a fairly quiet race after qualifying 8th; he ran mostly around 10th place until his Menard V6 grenaded on lap 123, leading to a 21st place finish. Funny how even the game abides by the real-world tradition of Menard engines blowing up. 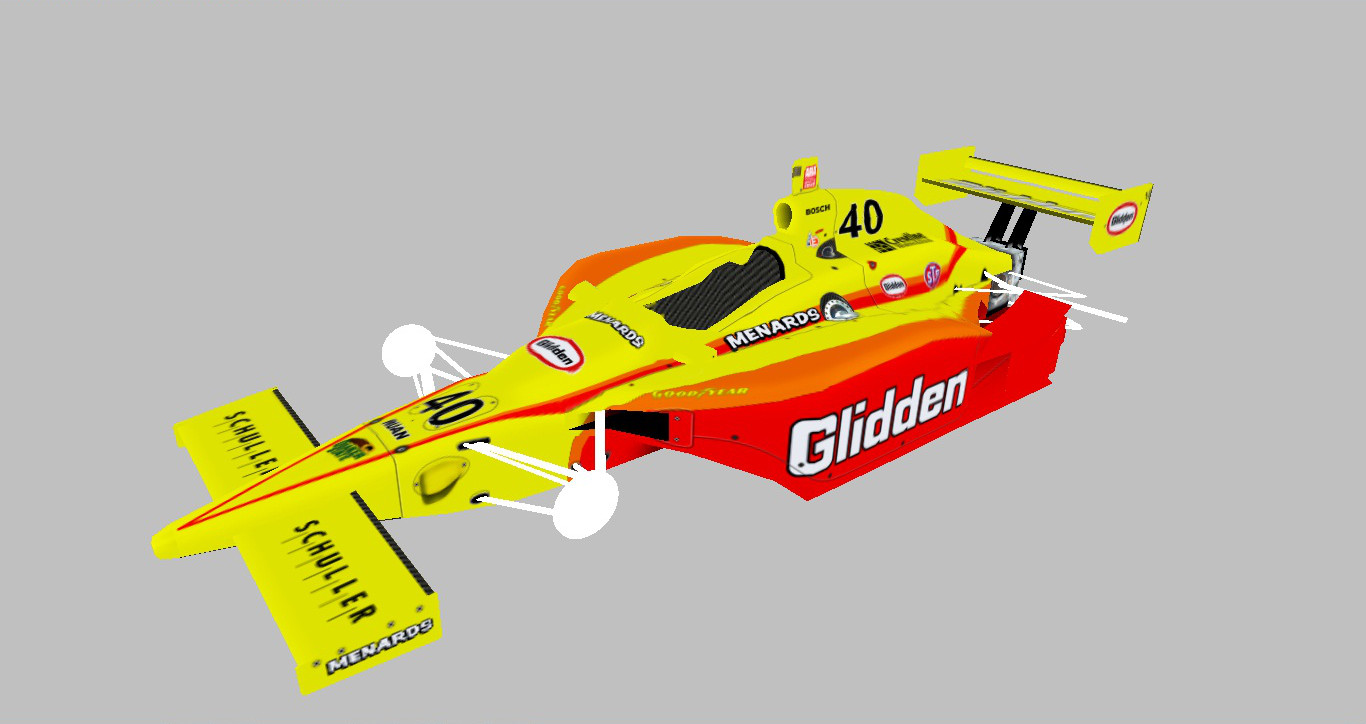 This is awesome. I've wanted to do a custom open wheel set for a while now.

crazyboy335 said:
This is awesome. I've wanted to do a custom open wheel set for a while now.
Click to expand...

Dude you totally should, I'd love to see it. I hate navigating the templates for pretty much every mod but they're not so bad when you get used to it.

Not just a one-trick pony, though it is distinctly possible that I'm a no-trick pony. Anyway, on the stock car side, these are some of my favorites that I've ever done. The Coors Light Pontiac has been run in recent years by Jerry Price. Inspiration for these schemes are drawn from an old concept of what Kyle Petty was going to run for the 1995 Winston Cup tour (which works out, Jerry Price is basically the Kyle Petty of my universe). I liked the colors so much, I slapped them onto Kyle's 1996 base and just ran with it, and I must say I think it looks pretty god damn sweet. Top is from '95, bottom is for the upcoming '96 season. Here's some stuff run by my pseudonymic namesake in my narrative. Naturally I'm selfish so these #8 cars are up front quite a bit, particularly having won the championship in 1990 and 1995. And they're in a couple different series, because imagination.

Yeah they're pretty much ripoff Davey and Ernie cars minus a 2. Story is I'm a massive Ricky Rudd fan, and wanted to choose a long-term iconic sponsor that he had at some point. Thought of going with Ford Motorcraft at first, but instead went with Texaco/Havoline for me since that was peak Rooster in the duration I've followed the sport (FWIW that 88 in my screen name has nothing to do with Jr. or Jarrett. I joined SRD when Ricky came back in the Snickers car). Got a Tide car as a teammate as well. Credits:
Templates - DMR, Wardog, SNG
logos - google, racingrafix, heywood... I'm sure there are others. Some of these are a couple years old, so sorry if I miss you
Contingencies - slippy, me, CC#48, DER
Numbers - jeebs

Here’s some different content to show in the showroom. For anyone interested, this is one of the methods to my madness that I briefly mentioned in the screenshot thread a little while ago. This is essentially the way that I assign ratings and keep track of my team’s progressions throughout the seasons in all my series, inspired by promotion and relegation in soccer (if you watch soccer outside of the US, you know how this works). I’m sure any of us who run our own leagues use tiered ratings systems. I split my full-time teams ratings into five categories, A-F, to the point that there is a fairly normal distribution of teams in each category, yet still enough to have promotion and relegation.

This only applies to teams. Drivers ratings fall into the same five categories, but I don’t yet have a system for those so they get assigned to whatever the hell I want. So, if a team does poorly, [higher rated] drivers and sponsors might choose to go elsewhere. Lower rated teams can also punt on good rookies to out-perform other teams in that category, so they can move up the ranks and get better sponsors. Or, lower-rated teams might run out of funding and leave the series. This process is pretty arbitrary, I just use this team rating scoring system as a reference for my silly season lores.

The number of spots that are available for promotion and relegation depends on the number of full-time teams. For the IndyCars pictured, there is only one promotion and one relegation spot for each category. For my stock car series, there are about 35-ish teams, so there are two promotion and two relegation slots for each ratings category (number in each category is clearly different too. For that, its something like 5-8-12-8-5). Things get a little shaky when teams enter/exit the series and they need a place to fit in, but for the most part things stay pretty uniform.

No idea if anyone has thought of doing something like this, but if this pro/rel type deal strikes you as useful to implement in a long-running offline league, feel free to take the idea. ^ I do something like that in my series too, although mine only has 4 tiers. I have an Excel sheet that calculates the average number of points each team is earning, and then after a team runs a designated number of races, I re-evaluate what ratings class they have. Usually they end up in the same tier, but sometimes I get teams rising and falling which helps get a better variety of cars up front. Also, each of my drivers has a unique ratings set that never gets any better or worse, mainly because I don't want to add any more complexity to what I already have lol.

I thought I was probably the only crazy person that could be bothered to do ratings like this, so it's nice to see I'm not alone haha.

Nah mate, you're not alone. Any time I can think to add complexity, I'll do it. I work with quantitative data for a living, so the more data and complexity I can hoard for a hobby the happier I am.

THIS TEMPLATE IS SO MUCH BETTER (I actually just discovered TMS does automatic renders because I'm so out of the loop... then I discovered the IR12 scene isn't for the new mod which... of course it isn't since its so new. So... you get carviewer still for now because I just can't be arsed)

Credits:
Template - NFF
Base - traced by one of the cars in the mod, still learning the temp
logos - google, racingrafix, me
Numbers - EFR (I believe)
Last edited: Jun 14, 2019 Credits:
Template - NFF
Base - me
logos - google, me
Numbers - me

I just realized, the gay dude should do a gay car for pride month. Guess that falls on me... Oh, and this happened: nascarfreak88 said:
I just realized, the gay dude should do a gay car for pride month. Guess that falls on me...
Click to expand... 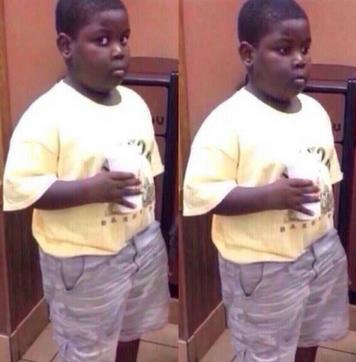 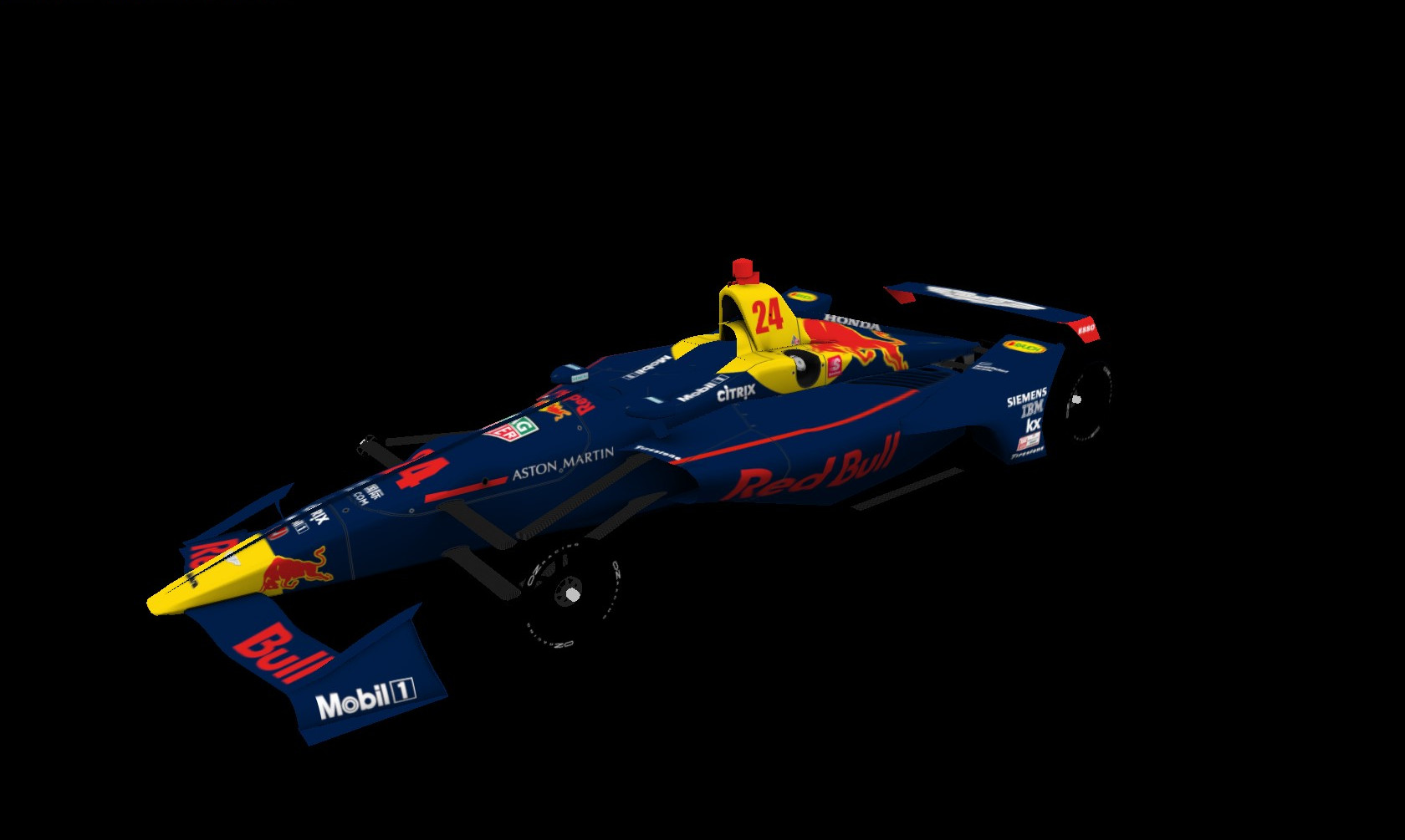 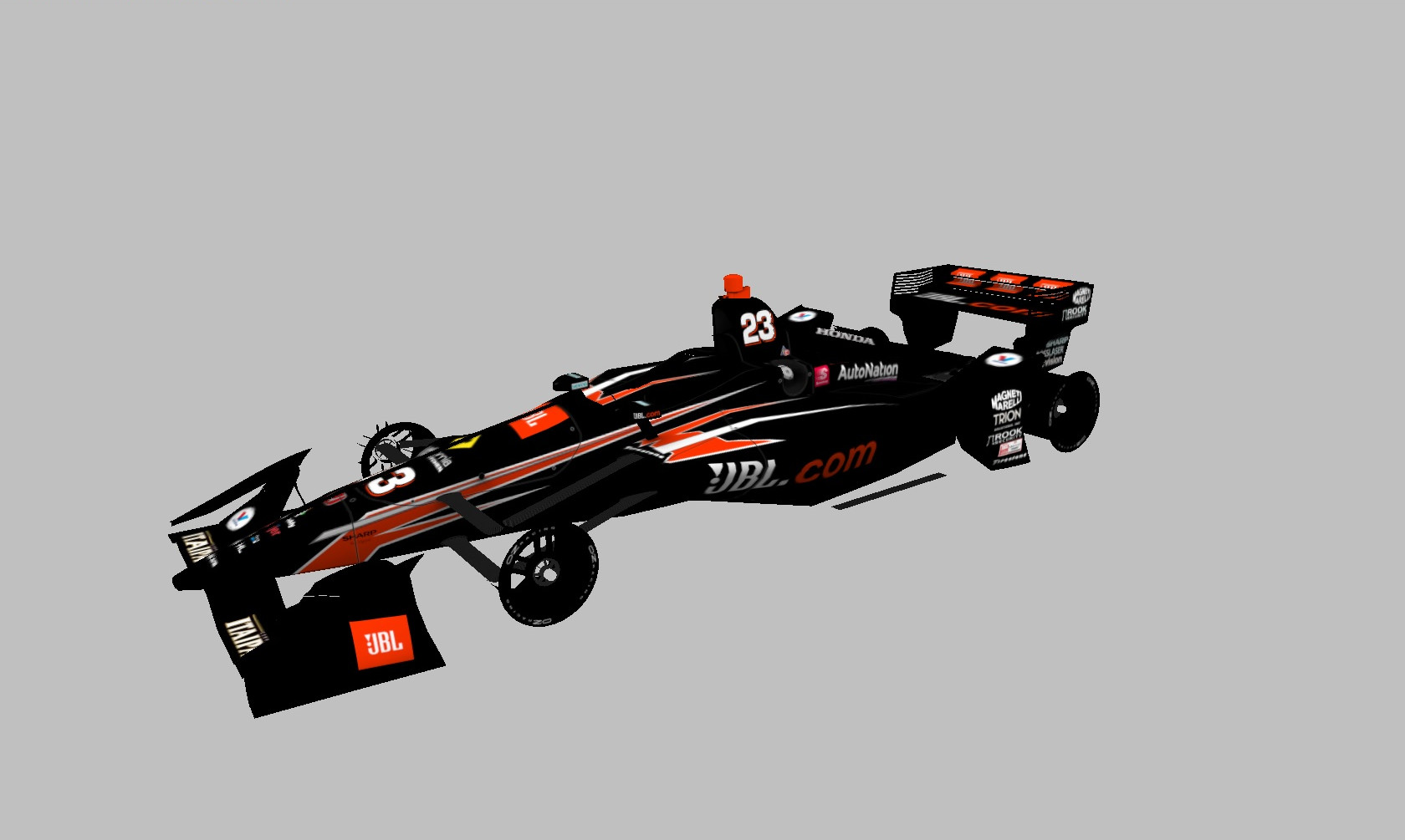 No, YOU'RE AN ALCOHOLIC! 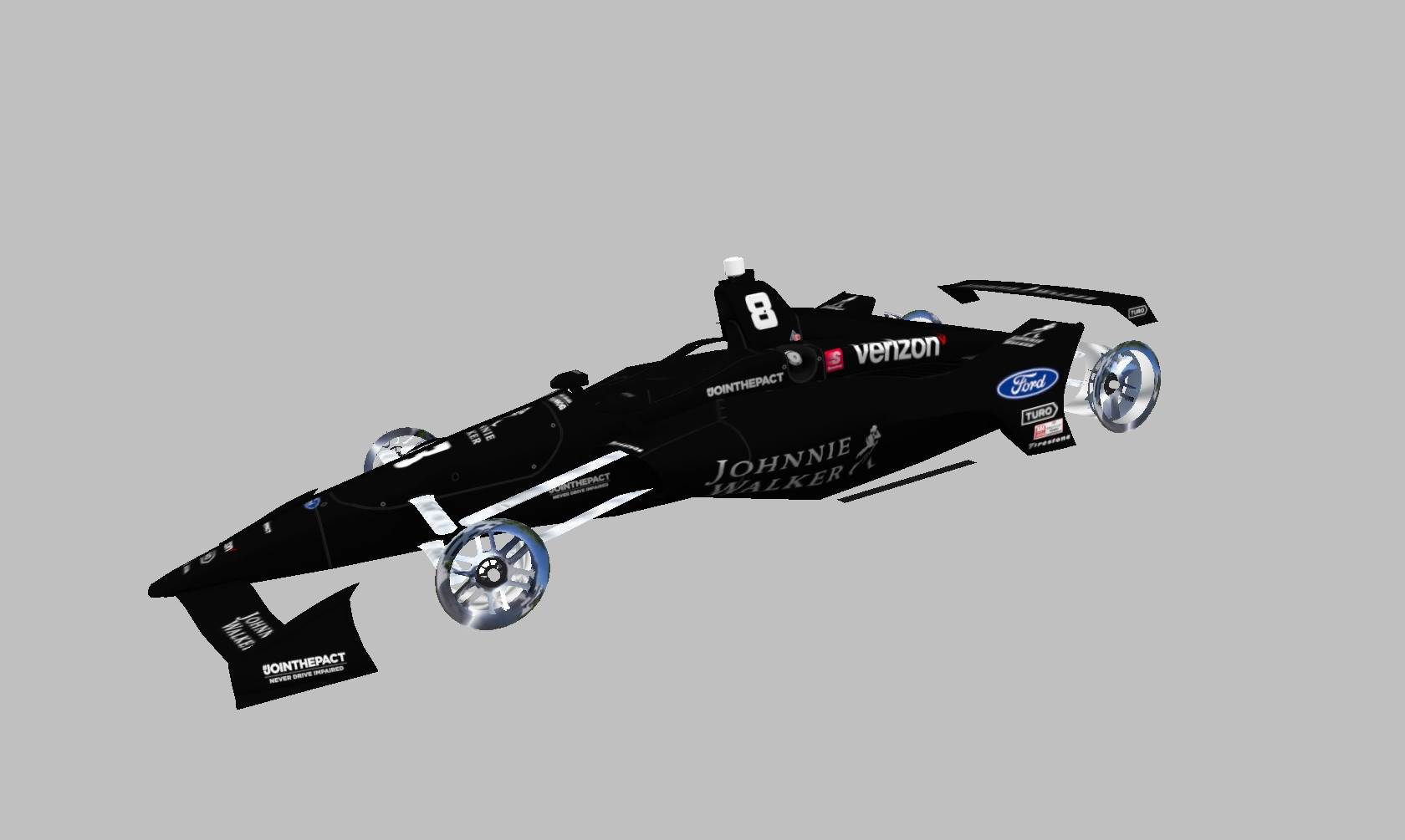 I was considering doing a proper livery with some chrome-esque fins, but I'm kinda liking the clean black look. What would y'all suggest?
Credits:
Template - NFF
Base - me
logos - google
Numbers - me
You must log in or register to reply here.
Share:
Facebook Twitter Reddit Pinterest Tumblr WhatsApp Email Link
Top