Thirty-three members of the Sim Racing Design community submitted picks for the big events at the Brickyard this past weekend. This was a bit of a low-scoring event when compared to prior races, as all but nine members surpassed the 100 point mark and no member reaching 200 points. However, the top 5 all managed to score over 140 points. So, without further delay, let's take a look at our "Final Five" members who remain in contention for the win (in A-Z order):

Our winner this week had a fairly large margin of victory of 15 points! As well, this member is no stranger to victory lane in the SRD Pick'em Series and is actually the defending series champion! Please join me in congratulating @John Gregorio on picking up a win at the Brickyard with a score of 176 points! Finishing in the second position, and continuing his incredible streak of top 5 finishes, is @MattSRD28 with a score of 161 points! Sunoco Rookie of the Year contender, @TheOutlaw1272, picks up another top 5 finish as well, finishing in the third position with a score of 154 points! And rounding out the top 5 this week, we have a tie between @BobbyRicky62 and @Johnnyk1990, each with a score of 144 points!

2019 Big Machine Vodka 400 at the Brickyard Full Race Results, brought to you by @MattSRD28: 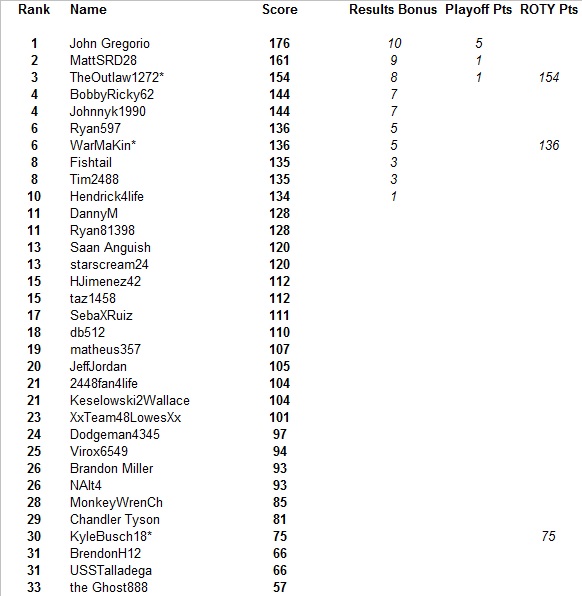 The title of "Brickyard 400 Winner" wasn't the only thing up for grabs this week in the SRD Pick'em Series. As you all are aware, the Indy marked the last regular season race of the 2019 SRD Pick'em Series season. While we had many members who performed well this year, one stood out from amongst the rest. So with that, please join me in congratulating @db512 on taking home the regular season championship and an additional 15 playoff points! 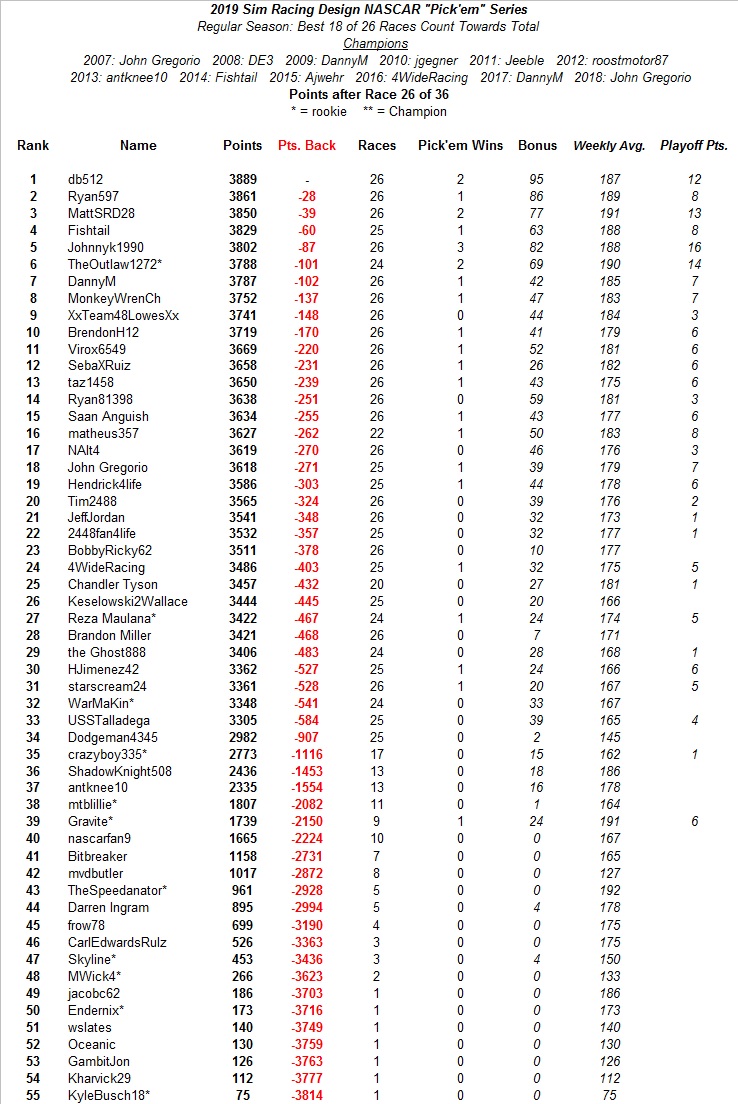 IT'S PLAYOFF TIME, BABY!!!​
@John Gregorio picked up quite a big win this past weekend. It not only solidifies his position as one of the best of all time in the SRD Pick'em Series, but it also helps him to punch his ticket into the 2019 SRD Pick'em Series Playoffs! However, there are always two sides to every story, and on the losing end of this one is @4WideRacing, who just barely misses out on making the Playoffs. (If only his favorite driver could have met the same fate in real-world NASCAR... jk... kinda...)
Let's take a look at the Final Playoff Cutoff Rankings, brought to you by @MattSRD28: 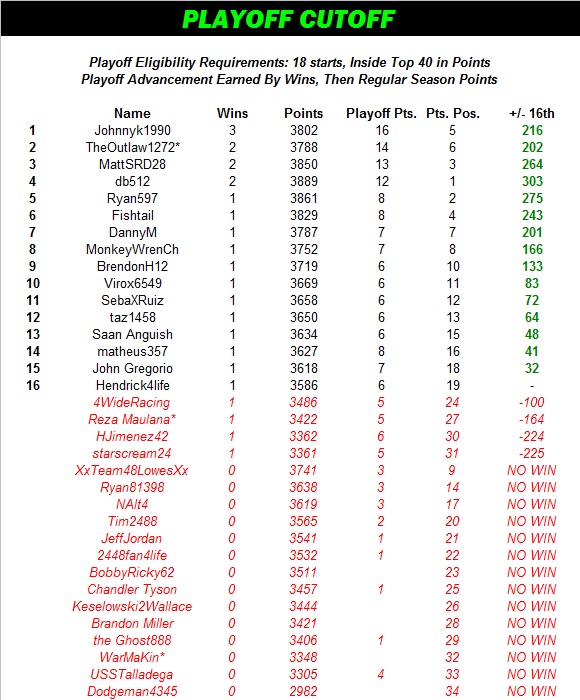 Now, let's introduce the 16 members who will make up our 2019 SRD Pick'em Series Playoff field!

Congratulations to all of you and best of luck throughout the Playoffs! Now, let's take a look at the Round of 16 Playoff Rankings and updated Series Standings, brought to you by @MattSRD28: 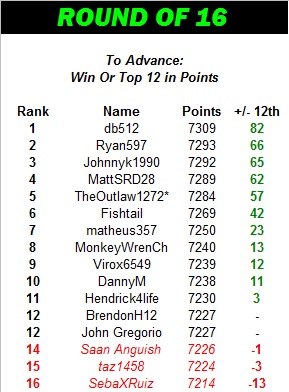 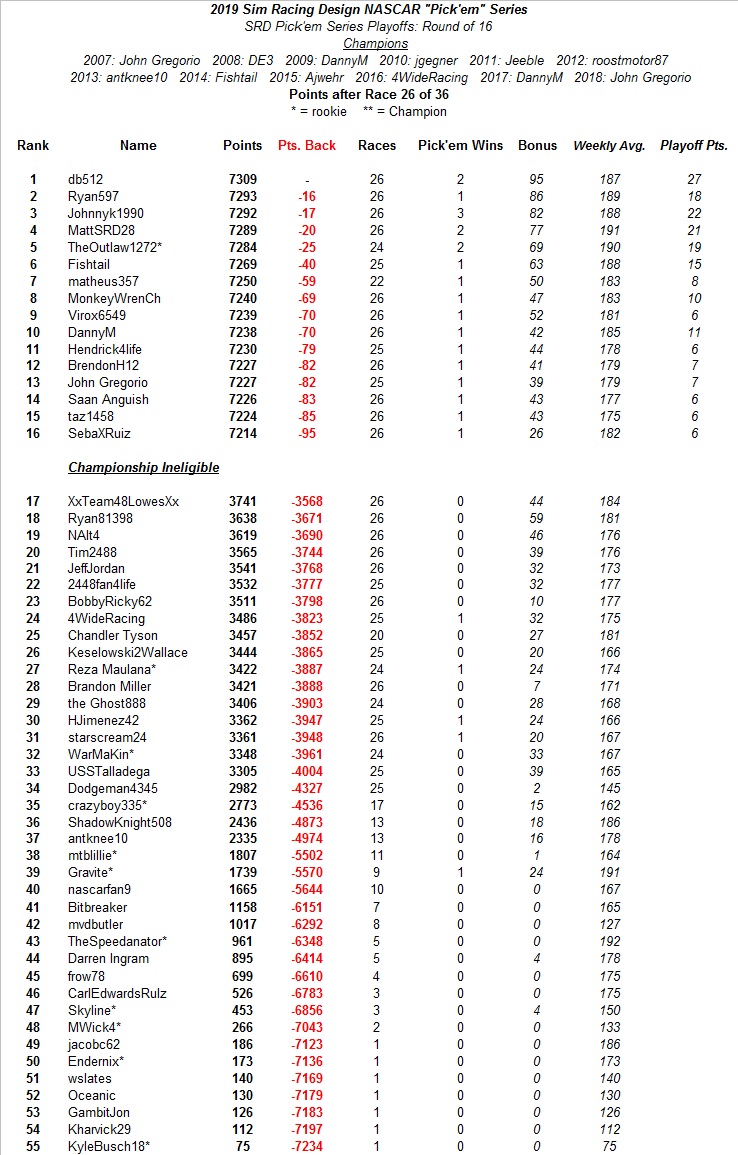 Now let's see how our SRD Pick'em Series Sunoco Rookie of the Year contenders are looking heading into the playoffs... Once again, @TheOutlaw1272 took this year's rookie class to school with yet another great finish of third place! As well, @TheOutlaw1272 is the only rookie contender who will compete for the Championship, as @Reza Maulana just missed out on a Playoff spot. 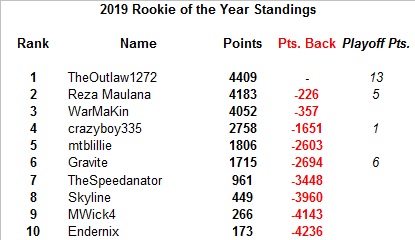 And finally, let’s take a look at the lowest scores for some of our non-Playoff-making, pick-submitting members here at SRD: 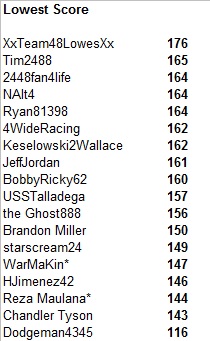 This week, the SRD Pick'em Series heads to Las Vegas Motor Speedway, where our field of 16 will gamble for a win and a ticket into the next round of the Playoffs! The Vegas thread will be up shortly. Please don't forget to submit your picks! You just might be lucky enough to hit the jackpot and pick up a win to advance in the Playoffs or possibly spoil the Playoff party!

Also, @MattSRD28 will be going on a business trip this weekend and will not be able to process the Vegas results per his usual schedule. But don't fret - as soon as he is back, results will be up and everything will continue on as scheduled.

Damn, I knew @John Gregorio had the winning picks, gg.
B

Known in some circles as 19Caleb93

Well, I sure didn't think I'd be this close to victory and the playoffs in the last race of the regular season.

Gut wrenching to miss out on the playoffs by so little especially since I didn't participate in this race lol The Kyle Busch hate actually made me laugh
10 races to try and play spoiler to the playoff members lol
Click to expand...

Now that I know you didn't, it feels even worse to make it by such a slim margin.

Hendrick4life said:
Now that I know you didn't, it feels even worse to make it by such a slim margin.

Wow what a crazy race. It was win or go home. It's been a down year for me in pickem. I always seem to pick favorites that don't perform. Didn't explain to come out on top! Good luck to everyone at Vegas.