OP has been updated with all the fancy graphics! lol

Also, I've decided to close out the race weekend threads and add the main parts of the RWD's (such as the weekend schedule) to the Pick'em threads. I may add the previous year's races/highlights to future Pick'em threads as well. Any thoughts from you guys on this change are welcomed and greatly appreciated!

Thank you all for playing and being a part of our little community here at SRD!

Thirty-three members of the Sim Racing Design community submitted picks for the events at the Daytona Road Course this past weekend. While scores weren't exactly off the charts this week (which would probably be expected of picking for a brand new race track), our top 6 finishers were able to break that 200-point barrier, and all members were able to score well over 100 points as well! We also had another tie in our top 5 - this time for the win! But before we get too far ahead of ourselves, let's take a look at our "Final Five" who battled it out for the very first win at the Daytona Road Course (in A-Z order):

Some very nice picks were submitted by our "Final Five" in the inaugural SRD Pick'em Series event at the Daytona Road Course. But only one set of picks was good enough for the win... Hold up! Actually, two sets of picks were "good enough" to take home the win this week! However, we can only hand the trophy to ONE of our members, and after going through our unique tie-breaking process, @MattSRD28 was able to determine just who that is! So, without further delay, please join me in congratulating @Johnnyk1990 on taking home his third win of the season! He does so with a score of 209 points! SRD Sunoco Rookie of the Year contender, @HakaBaka, just missed out on scoring his second win of the season. He also finished with a score of 209 points! @matheus357 places third with his score of 206 points, with @Ryan597 placing fourth - scoring just one point less, having a total of 205 points! And @db512 rounds out our top 5 with his score of 203 points! 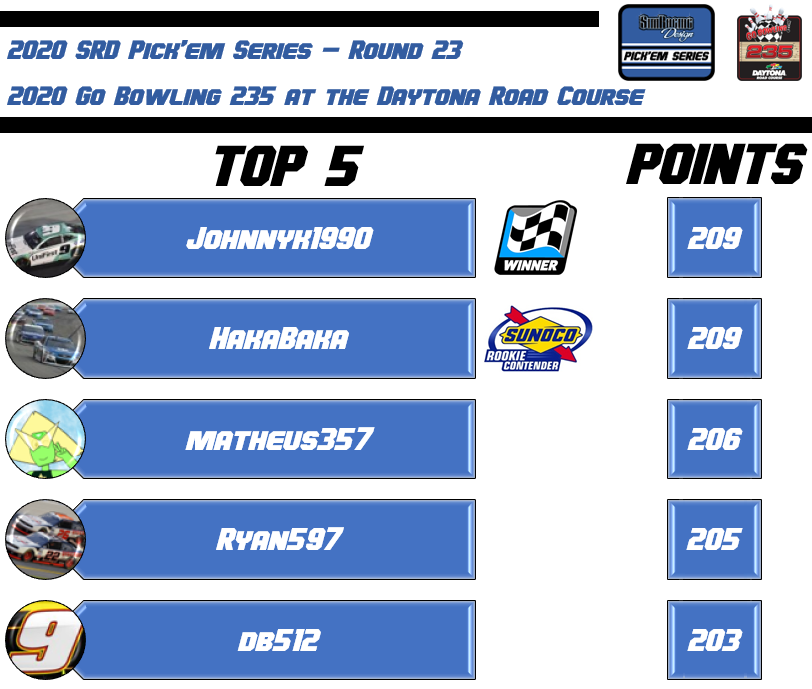 2020 Go Bowling 235 at the Daytona Road Course Full Results, brought to you by @MattSRD28: 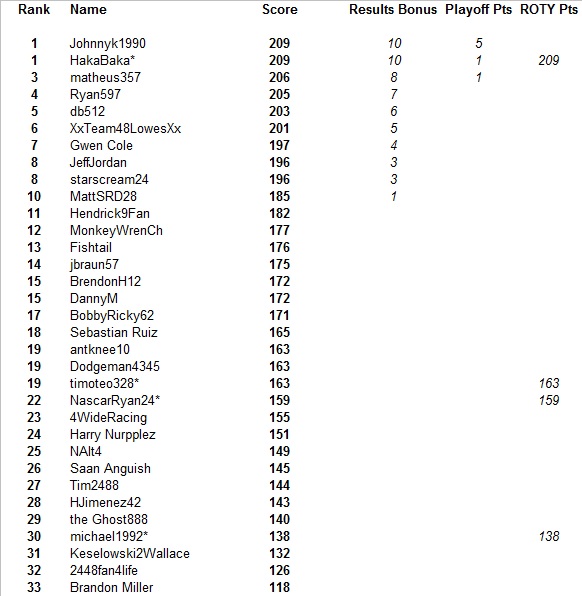 Following the series' first trip to the Daytona Road Course, @Johnnyk1990 becomes the first three-time winner of the 2020 season! He, along with our two-timers - @db512, @Keselowski2Wallace, @BrendonH12, and @Ryan597 - are very comfortable with their current Playoff positions and are pretty much on lock to make the 2020 SRD Pick'em Series Playoffs! However, for all of our members who only have one win so far this season - @Brandon Miller, SRD Pick'em Series Rookies @timoteo328 & @HakaBaka, @MonkeyWrenCh, @MattSRD28, @Gwen Cole, @jbraun57, @4WideRacing, @Hendrick9Fan, @2448fan4life, @NAlt4, and @Hendrick4life - the Playoff picture is a lot less clear. As noted last week, we are up to 17 on the winner count for the 2020 SRD Pick'em Series season. - putting us one over our 16-member Playoff field limit. That means the bumping has begun and the battle is on for the 16th and final playoff spot! @Gwen Cole currently holds on to that last spot in the Playoffs, while @jbraun57 - though having a win in his pocket from earlier this season - is currently on the outside looking in. BUT there's still some time for @jbraun57 and any of you - yes, YOU!!! - to steal a win and a Playoff spot from another member! So just keep those great picks coming!

Let's now take a look at the current 2020 SRD Pick'em Series Playoff Cutoff as of Race #23, brought to you by @MattSRD28: 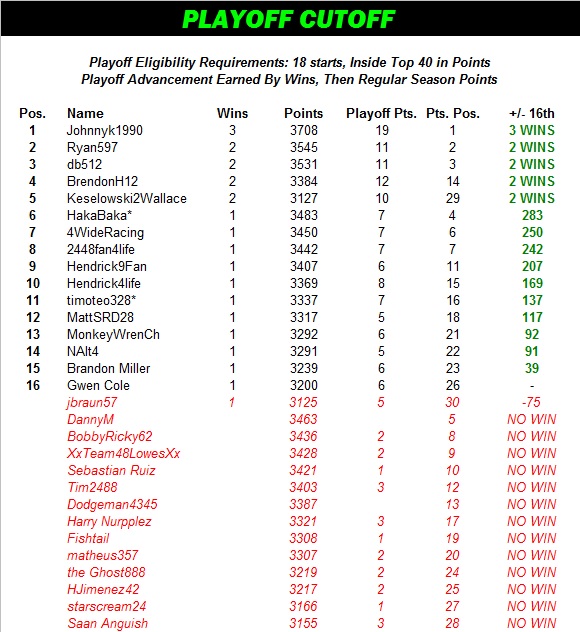 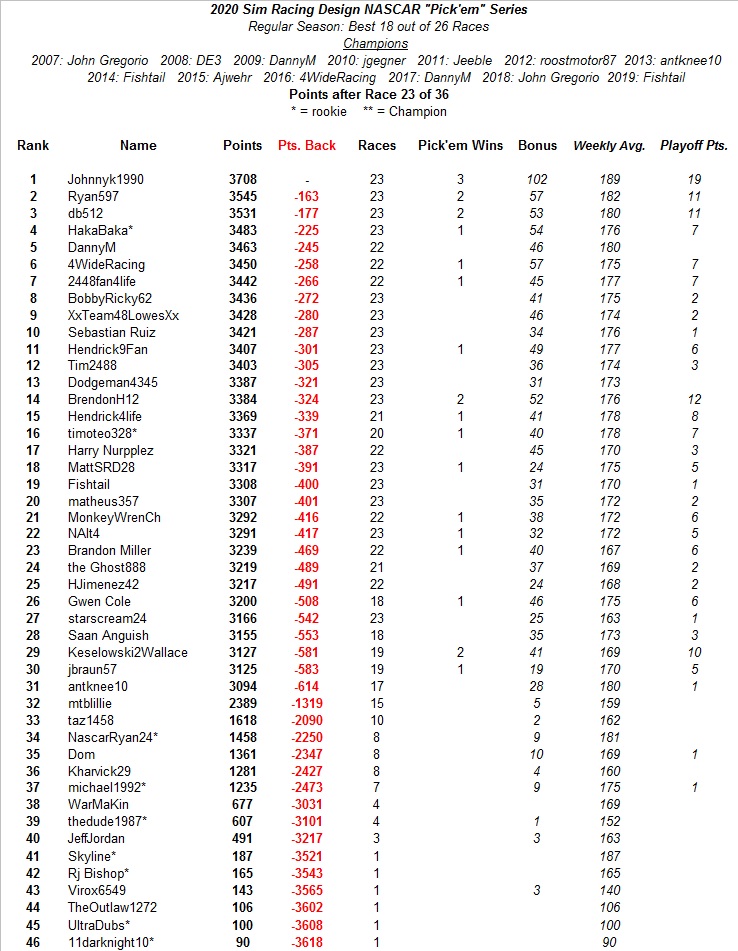 And an updated lowest scores list following the events at the Daytona Road Course...

And finally, let's take a look at our 2020 Sunoco Rookie of the Year Battle! @HakaBaka extends his lead over rookie rival, @timoteo328, after a near-perfect race for our rookie leader! The gap now sits at 497 points. Not much else to speak of on the rookie front... 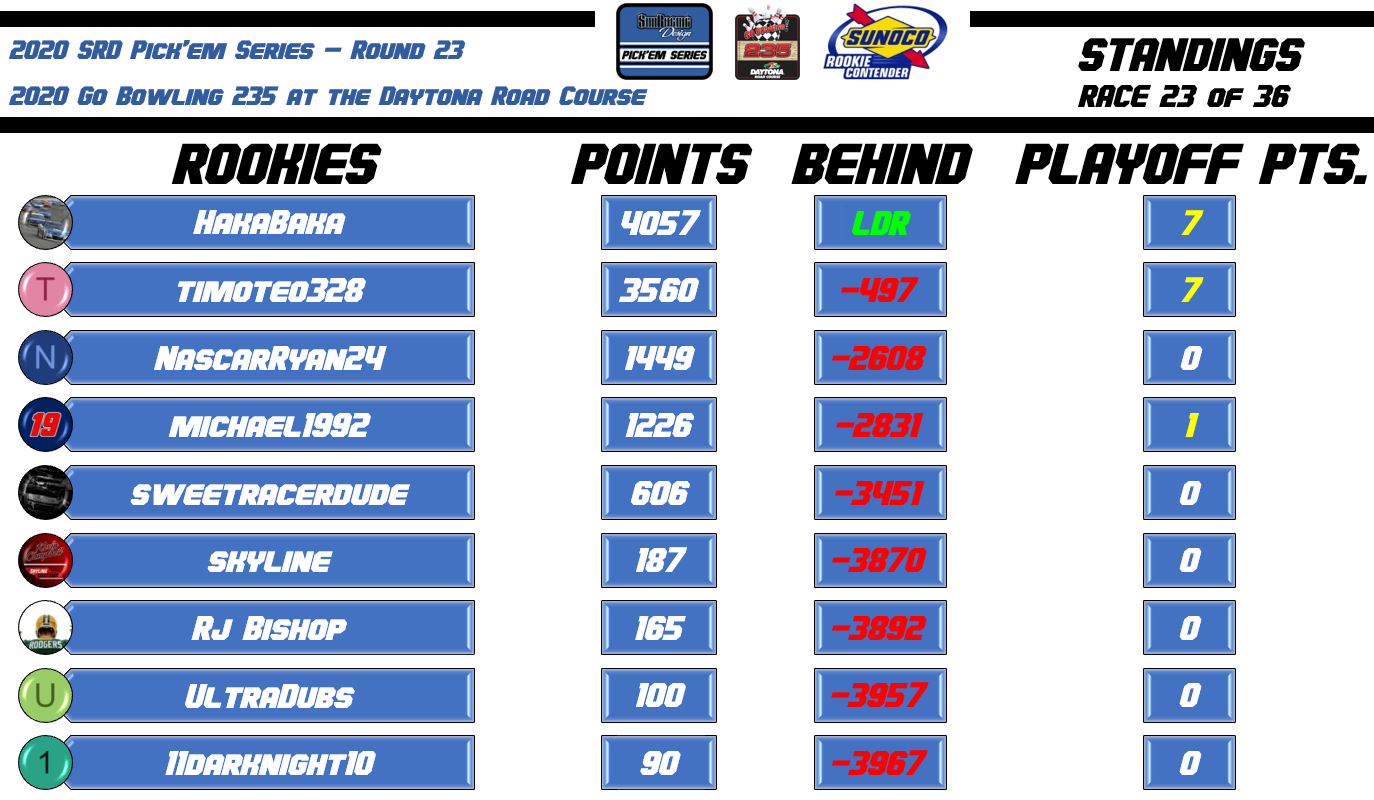 This week, NASCAR and the SRD Pick'em Series head up north to the Dover International Speedway for action from all three top series - including an NXS and Cup Series doubleheader! The Dover Pick'em thread is already up, so get yourselves on over there and make some great picks!

Thank you all for playing! See y’all in Dover!

GD I’m having a career season

Well that certainly could of been worse.