Well, it's a day later than I had hoped to get these results up, but nevertheless, here we go! One last race to make the Playoffs! Who's in and who's out?! Let's find out now...

Thirty-one members of the Sim Racing Design community submitted picks for the events at Daytona International Speedway and World Wide Technology Raceway at Gateway this past weekend. Scoring was down compared to recent weeks, but that is to be expected at an unpredictable track like Daytona. That being said, all but one member did manage to score over 100 points! As well, there was once again a tie in our top 5 - this time for the second position! Now, let's take a look at our "Final Five" who battled it out for the win in the final regular season event of the year (in A-Z order):

As we mentioned above, scoring wasn't exactly fantabulous this past weekend, but our top 5 finishers had decent showings, mostly scoring in the 180's. But only one member can come out on top and take home the win... So, without further delay, please join me in congratulating @db512 on taking home his third win of the 2020 season! He does so with a score of 187 points! Second place belongs to one of our "bubble" members as it regards making the Playoffs, @Gwen Cole, as well as @Tim2488, who both scored 184 points each! Fourth place goes to @XxTeam48LowesXx, who is just coming off a win at Dover. He ended up with a score of 182 points! And finally, @Sebastian Ruiz takes home the final top 5 spot of the regular season with his score of 177 points! 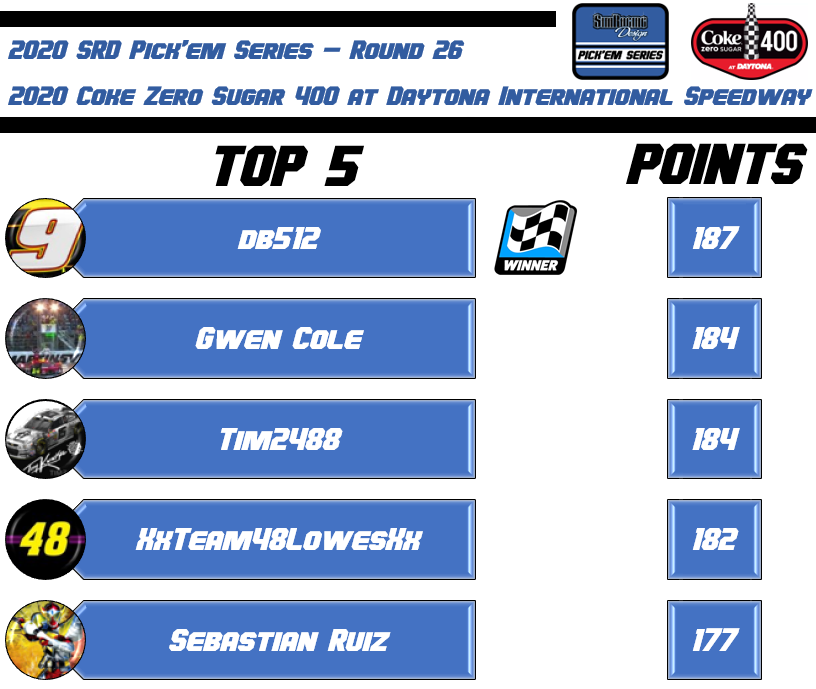 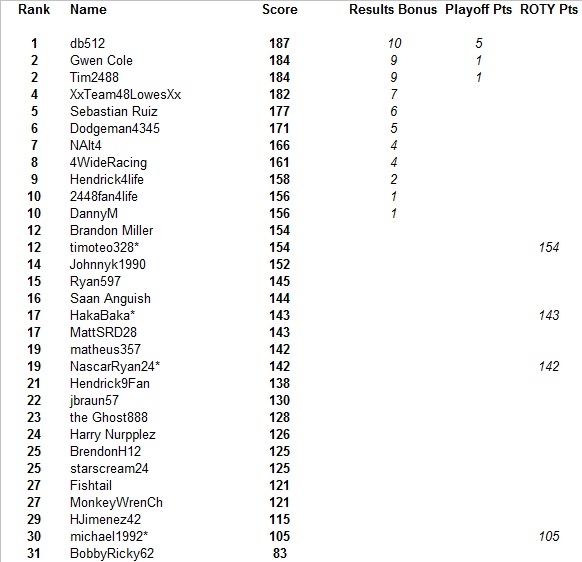 Not only did @db512 take home his third checkered flag of the season, but he also shut down any opportunity for a "win and you're in" situation for any other member! That was very much appreciated by some members, while being greatly frowned upon by others. But at the end of the day, some are going to make it into the Playoffs and the others are going to be left greatly disappointed.

Many of our current Playoff members entered this weekend with little worry. However, four of them were very anxious coming in... Let's meet and discuss these "bubble" members...
@Brandon Miller
@Gwen Cole
@starscream24
@jbraun57

All four of these members scored a win at some point this season, but only one could advance to the Playoffs. Following the events at Dover, @Brandon Miller held a 28- and 38-point lead over @starscream24 and @Gwen Cole, respectively. On the other hand, @jbraun57 only had one shot at making the Playoffs - score another win at Daytona. However, @jbraun57 finished in 22nd place and will, unfortunately, not be moving on to the Playoffs. As well, @starscream24 didn't have the greatest of showings at Daytona either, finishing in a tie with @BrendonH12 for the 25th position. @starscream24 will also miss out on the 2020 Playoffs. So, it all came down to @Brandon Miller and @Gwen Cole... @Brandon Miller didn't have that bad of a race this past weekend, finishing in a tie for the 12th position. However, @Gwen Cole faired much better, finishing in a tie for the second position! This battle was super tight, and actually, both members left Gateway with the exact same amount of points! So, to break the tie, we turned to the Playoff points that members can score throughout the season, and by virtue of earning one more this past weekend, @Gwen Cole beats out @Brandon Miller by just that - one Playoff point! Congrats @Gwen Cole on making the Playoffs! Sorry, @Brandon Miller, but your championship hopes have come to an end. But we want to wish the best of luck to @Brandon Miller, @starscream24, @jbraun57, and the rest of the SRD community who didn't quite make the Playoff cut the rest of the season! Y'all can still go out there and make life miserable for our Playoff members!


So with that, let's take a look at the FINAL 2020 SRD Pick'em Series Playoff Cutoff, brought to you by @MattSRD28: 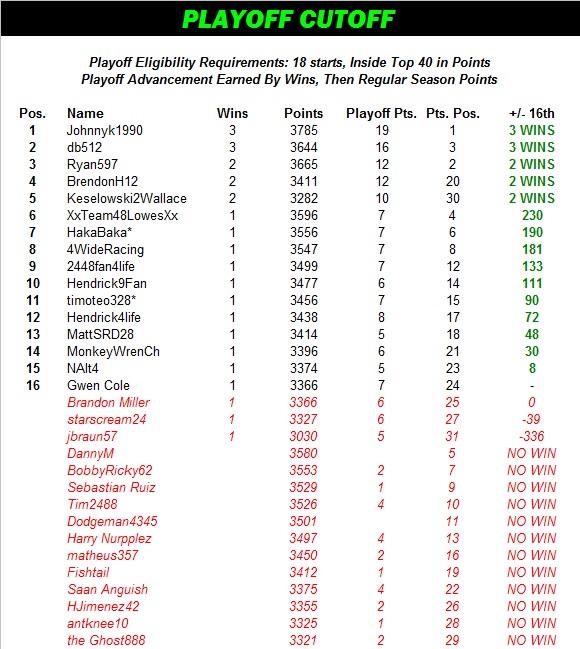 And our FINAL Regular Season Standings of the 2020 Season, brought to you by @MattSRD28: 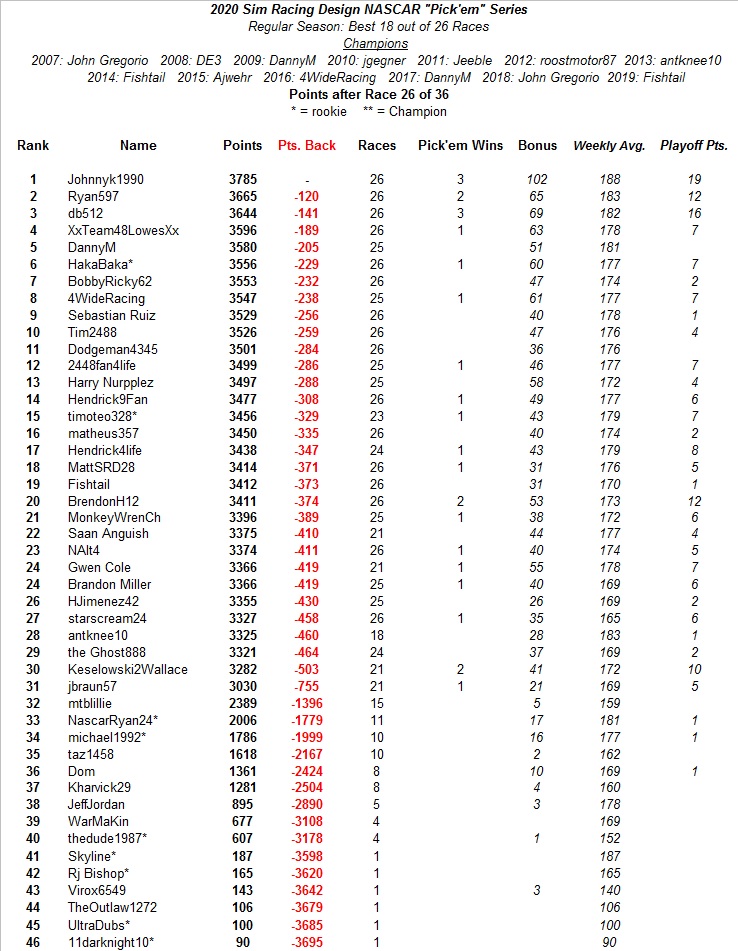 Congrats to our regular season champ, @Johnnyk1990! We'll see if he can continue his dominance in the Playoffs! 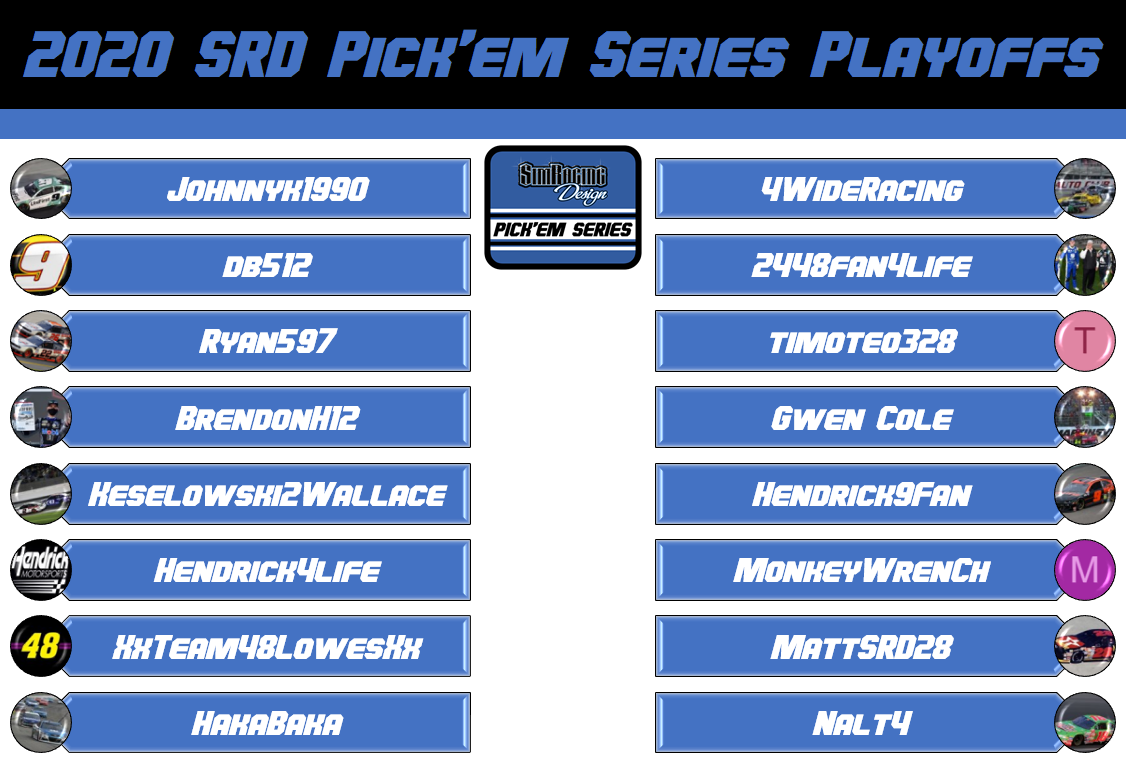 Congrats to all of y'all and good luck throughout the Playoffs!

Let's now take a look at our Playoff contenders' 2020 stats and how they got to this very point:

Now, we'll take a look at the first points reset of this year's Playoffs, brought to you by @MattSRD28: 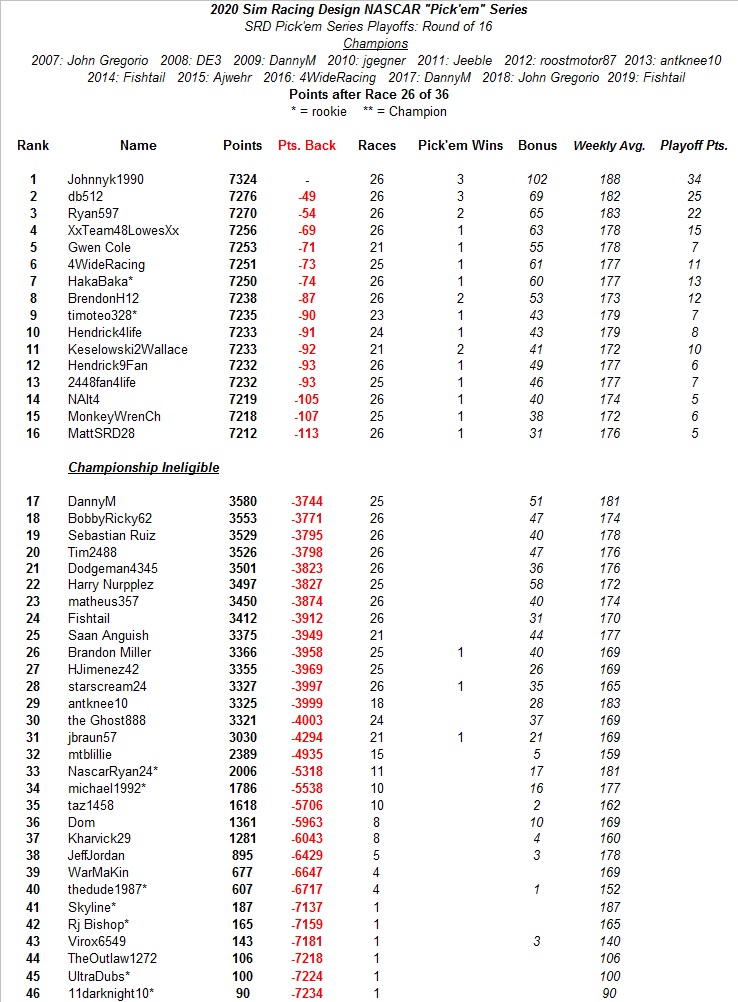 And a little look into the future - if the Playoffs ended before they even began! lol Ladies and gentlemen, the 2020 SRD Pick'em Series Round of 16 Standings, brought to you by @MattSRD28: 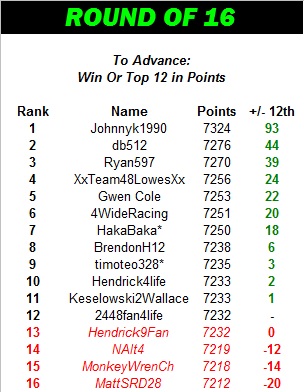 This graphic gives us a little idea of who really needs to come out of the gate strong in this year's Playoffs...

And now, the lowest scores from some of our faithful, non-Playoff-making, pick-submitting members: 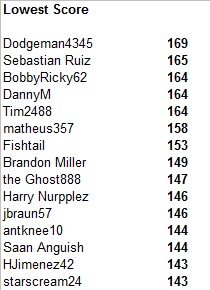 And finally, let's take a look at our 2020 Sunoco Rookie of the Year Battle! @HakaBaka continues to lead over rookie rival, @timoteo328. However, the gap is a little bit smaller, now totaling 478 points. And as well, congrats to our two leading rookies on making the Playoffs and good luck! 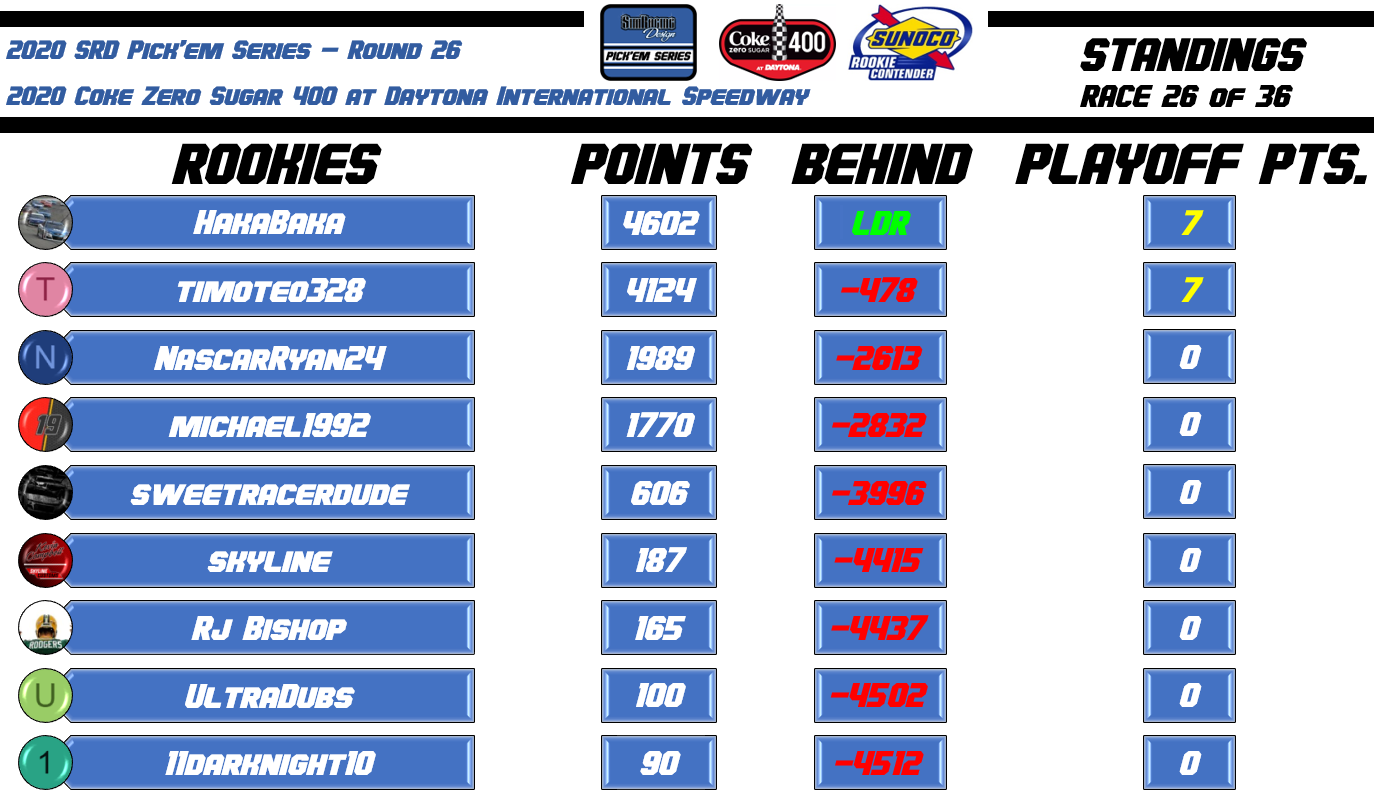 And just like that, we're finally caught up! Thank you all for your patience in awaiting the results from the past two weeks! We hope you all are ready to continue to compete for wins and, for our Playoff contenders, the Championship!

Holy shit my heart was going the entire time. I can't believe I made it.

Gwen Cole said:
Holy shit my heart was going the entire time. I can't believe I made it.
Click to expand...

Sorry about that. Maybe I made it a little too dramtic lol

But yeah, that was a super tight battle - the closest ever in SRD Pick'em Series Playoff history, to be exact! Congrats on making the Playoff field and good luck to you!

Pretty sure it's the first time I've ever missed the Playoffs. Well, it was a good run. lol

Congrats to everyone who made it though!

Freakin 10th outside looking in. Sigh.