Hey everybody. Looks like rain might interfere with the Wednesday Cup race. Here's what you can expect for the various possibilities that may ensue from that.


If the green flag waves but the race does not reach minimum distance to be official and is postponed, all picks are locked no matter how long the postponement lasts.

In the race does not start and is postponed for days or even a few weeks, this thread will be remain open for making and editing picks for the duration of the postponement.

If the race does not start and is postponed for a month or more, this thread will be scrapped and a new one will open at whatever later date the race is pushed back to.

Thanks for your participation and understanding.

Thirty-one members of the Sim Racing Design community submitted picks for the second round of races at the Darlington Raceway. Of those thirty-one members, only three managed to break the 200-point barrier, while all members managed to score well over 100 points! Scoring was a lot closer for this second Darlington race - particularly for the win, with the top 3 being separated by just 6 points! But before we get ahead of ourselves, let's introduce our "Final Five" who will compete for the win at the track dubbed "Too Tough to Tame" (in A-Z order):

So who was able to take home the win at Darlington: Round 2? Let's find out now!

As always, some great picks were submitted for these events. But there can only be one winner! So, without further delay, please join me in congratulating the 2016 SRD Pick'em Series champion, @4WideRacing, on taking home the W this week! @4WideRacing barely holds on for the win with a score of 217 points! Just two points from punching his ticket to the 2020 SRD Pick'em Series Playoffs is @antknee10, who finished with a score of 215 points. Our final member to reach the 200-point mark is @Tim2488, who finishes in third with a score of 211 points! And rounding out our top 5 are @NAlt4 & @DannyM, who finished with scores of 199 and 196 points, respectively. 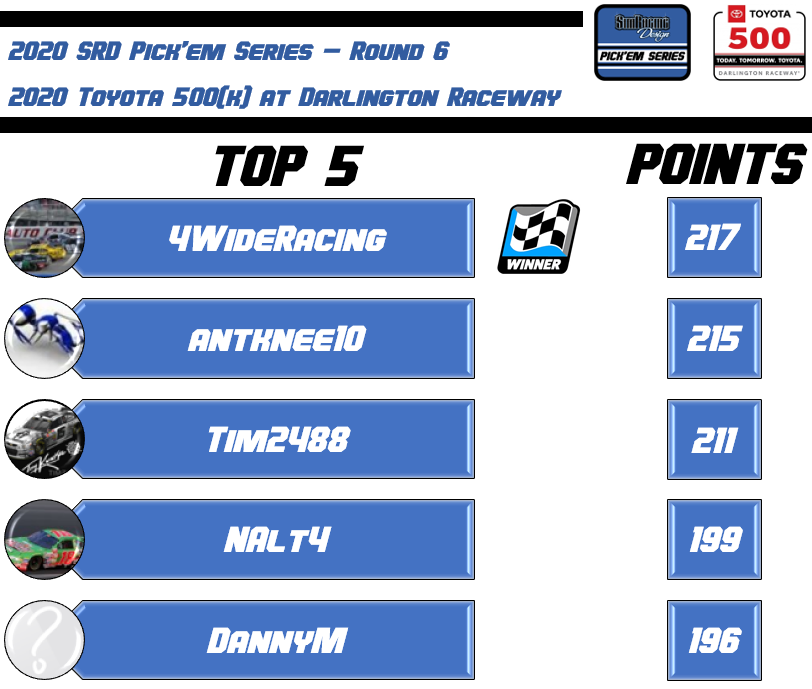 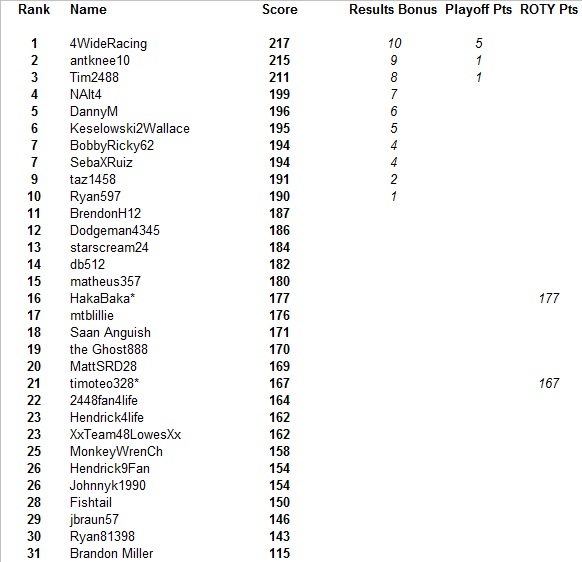 With this win, @4WideRacing joins our other Darlington winner, @Hendrick9Fan, as well as @2448fan4life, @NAlt4, @Johnnyk1990, and @Hendrick4life as the only members who have managed to find victory lane so far this season, and the only members who are currently locked into the 2020 SRD Pick'em Series Playoffs! But as always, it's still early in the season and each race brings a new opportunity for another member to join the ranks of the 2020 SRD Pick'em Series winners and the Playoff field!
So with that, let's take a look at the full 2020 Season Standings as of Race #6, brought to you by @MattSRD28: 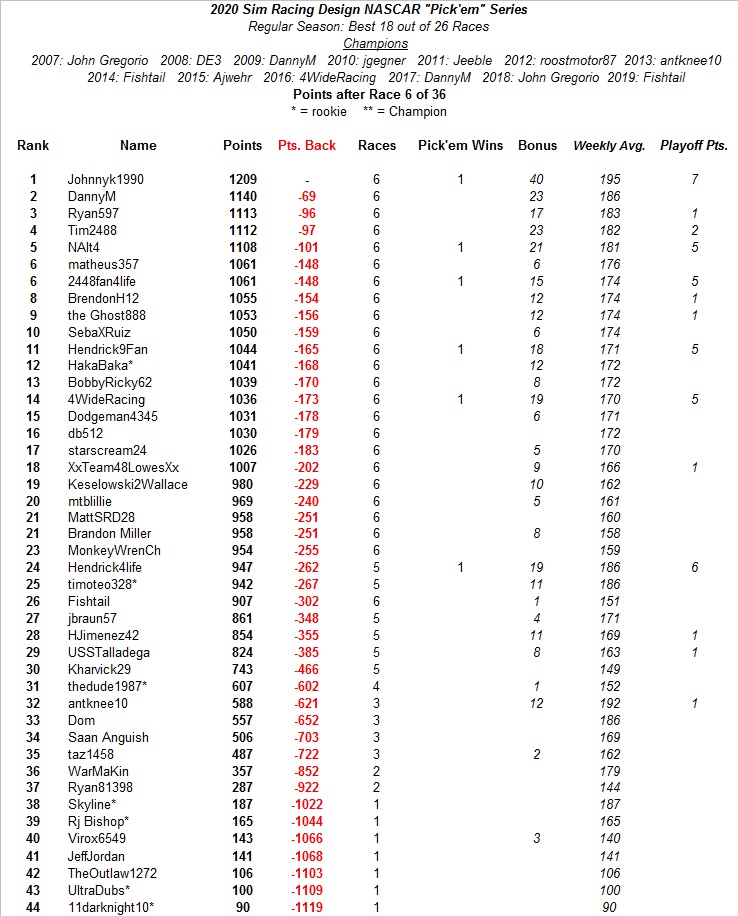 Finally, let's take a look at our Sunoco Rookie of the Year Battle! @HakaBaka continues to head up the rookie standings, while also taking home the title of top-finishing rookie. No other real changes to report following our second race in a row at "The Lady in Black."
So with that being said, let's now take a look at the 2020 Sunoco Rookie of the Year Standings as of Race #6: 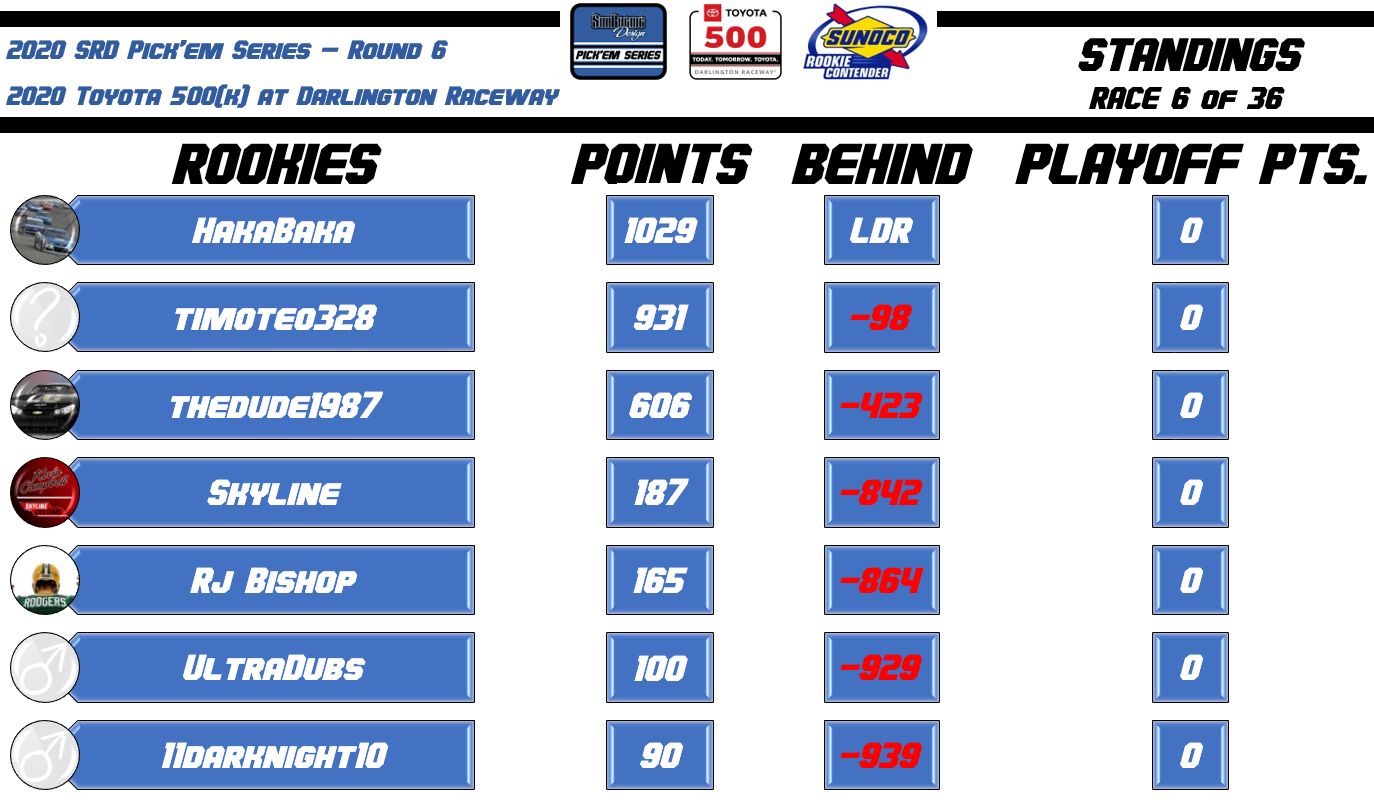 This weekend, NASCAR and the SRD Pick'em Series head "north of the border" to North Carolina and the Charlotte Motor Speedway - "The Beast of the Southeast" - for two more Cup races, along with Xfinity Series and Truck action! The Race Weekend thread and Pick'em threads for Charlotte will be up shortly, so don't forget to check those out and make your picks!!!

Thank you all for playing! See y'all in NC!

I had a good feeling about this race! Super excited to have won this early in the season!