Last Race: Cody Llamas dominated the 2nd half of the race at Darlington, cruising to his first victory of the season. Darlington also played host to the first of 2 cut races in this season's chase. It came down to the final lap for some of our playoff drivers to make it to the next round which begins this weekend at Talladega.
This Race: We start the 2nd round of the playoffs with a wildcard race at Talladedga. Anything can happen here and the remaining 10 playoff drivers will be looking to stay out of trouble and possibly punch a ticket to Homestead for a chance at the championship.
Race Info: 94 laps/250 miles
2017 Pole Sitter: T. Kunkel (50.463)
2017 Race Winner: J. Towianski [Ret.] (12 laps led)
Previous Winners: J.Hawkins (2016), J. Blanford (2015), A. Walz [Ret.] (2014), D. Asher [Ret.] (2013), R. Sandri [Ret.] (2011)

@BrendonH12 Well looks like Talladega qualifying gods have blessed you once again, since you're now in pole for the Cup Series after you got "awarded" the pole in Trucks due to the scoring glitch

"Alright, we've got a lot of work ahead of us if we want to stay alive. But hey, big congrats to Brendon and that #45 team for parking that Coca-Cola machine on the pole!"

"Ready to hopefully get lucky and get win #2 this weekend. We're starting pretty decent so we'll see."

RB- Last year we started 2nd and thought it was the turning point in our qualifying program...this season has been anything but so looks like it's back to the drawing board -_-

@BrendonH12: "Is this for real? Or did they just do the random drawing thing again? *chuckles* Yeah, I saw my buddy, @Reza Maulana, is still giving me a hard time over that one, but man, D.J. and all the guys back at HMS gave me a bad fast hot rod this weekend. The scoring sheet says that we were the only car under 51 seconds! That's some awesome speed right there. Hopefully we can keep this #45 Coca-Cola Chevy Camaro ZL1 clean and out front all race long once that green flag drops."

"We have our work cut out in this one."

One of my favorite tracks... Looking for a good finish if not the win here today!!!

We're just hoping for the best.

“Hope for the best but prepare for the worst.”

Sorry guys haven't been able to find the time to do a live race so to keep things moving here is a summary of Talladega.

Lap 1: Hancock leads on the start but Slates leads the opening lap ahead of Isaacs and O'Reilly.
Lap 2-11: O'Reilly, Curtain, Caudill, Farrell, Webster, Woodard, Merzlak, Harkleroad, and Root all lead 1 lap each as the field continues to jostle 3 and 4 wide. All 37 cars still within the same pack.
Lap 12-15: Webster the first driver to lead a 2nd lap before Hancock leads his first lap of the race. Curtain leads lap 14 and 15.
Lap 16-17: DeCosta leads two laps. Shane Lennox suffers an engine failure and becomes the first DNF of the race and takes a big hit in the points. 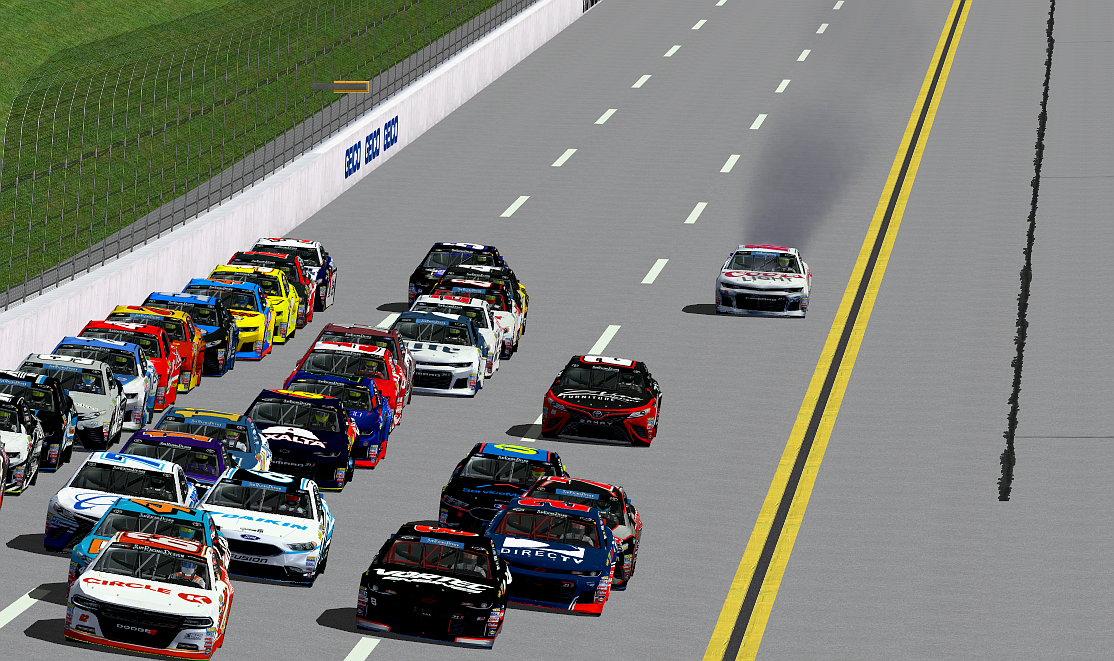 Lap 19-21: Curtain retakes the lead on lap 19 but gives it up to Craigo by a nose on lap 20. Curtain retakes the lead on lap 21 as two cars spin at the start finish line. Chaser Merzlak gets a tap in the rear bumper from Isaacs unsettling the 7 car. Merzlak gets turned down track into another chaser in Anderson. Both drivers spin to the apron but the caution does not come out as both drivers are able to continue on. 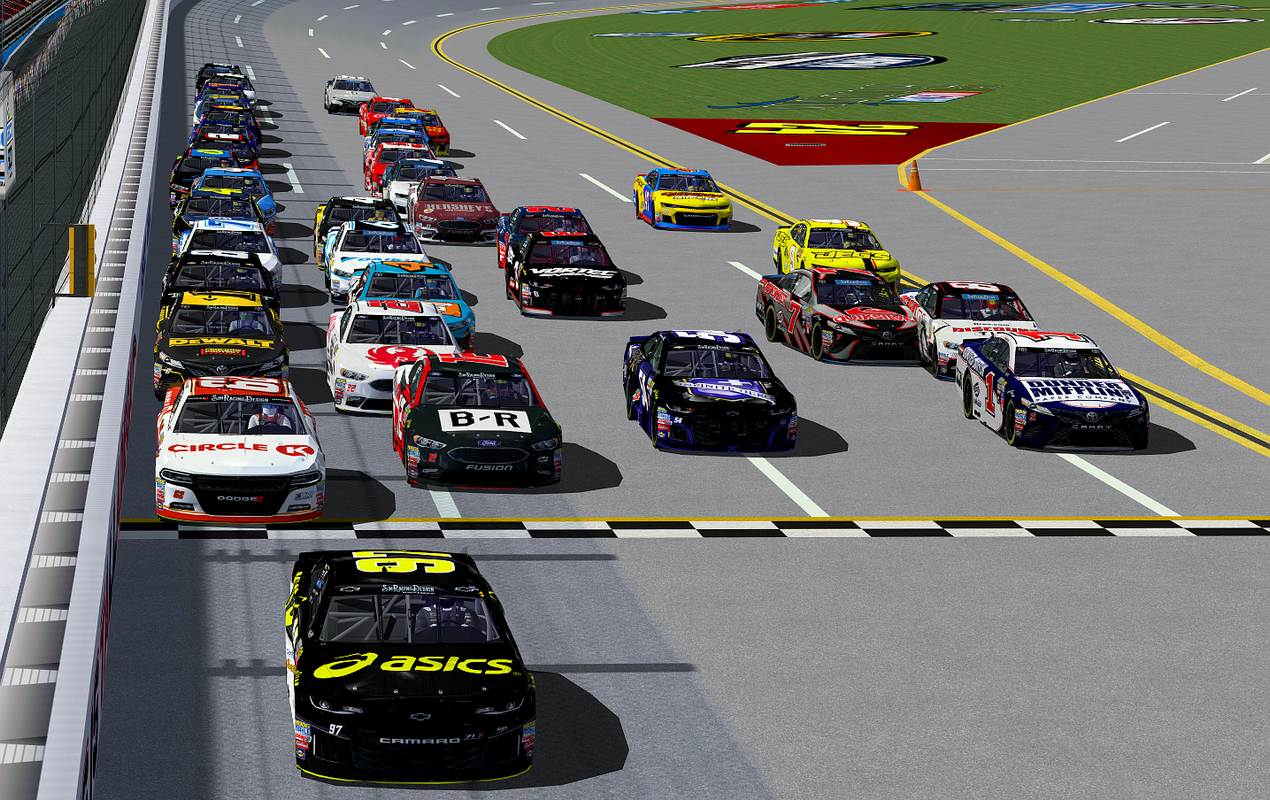 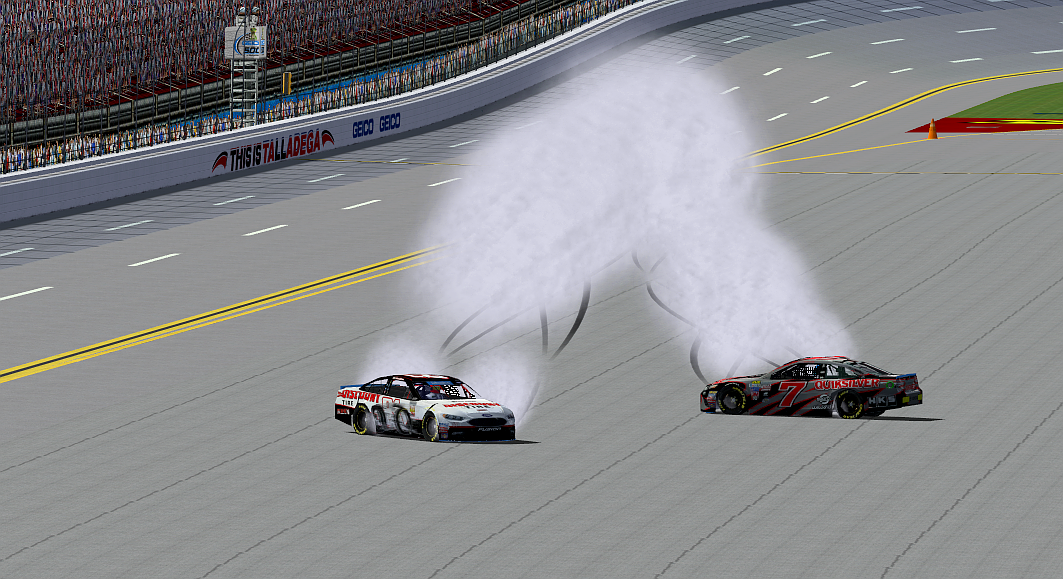 Lap 22-25: Curtain holds the lead as the field starts pitting for the first time.
Lap 26: Pit stops do not go smoothly as the field wrecks off turn 4 trying to split for pit road. Isaacs cuts down in front of O'Reilly causing both drivers to spin into the outside wall and collect Peters, Jordan, and Nixon. Nixon and Jordan spin down the track and collect drivers slowing to get to pit road including Spencer, Farrell, and Missimer. 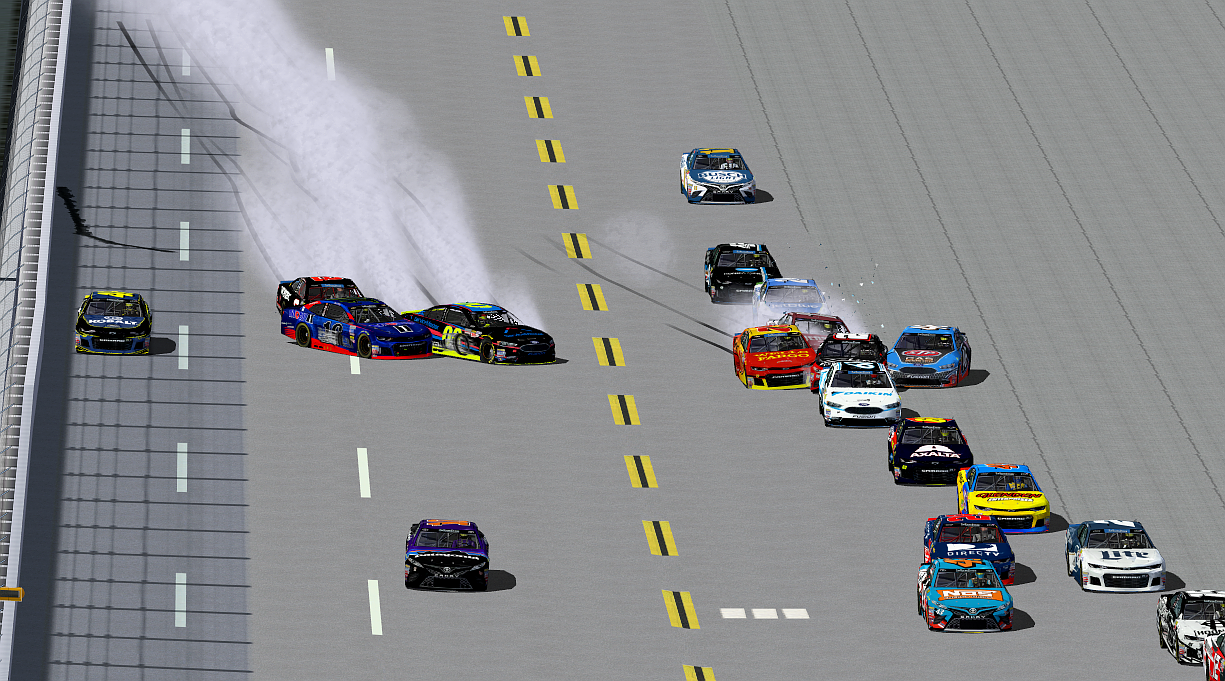 Lap 30: Isaacs, O'Reilly, and Jordan all end their races early. Hawkins is the race leader for the restart. Merzlak is 1 lap down, Anderson 2. Everyone else on the lead lap.
Lap 31-42: Harris, Hooper, and Root all swap the lead with Hooper and Root leading most of the laps between the 3. Bleskachek's engine expires on lap 35. Peters retires on lap 40.
Lap 43-46: Woodard, Llamas, Harkleroad, Kunkel, and Hancock finally split up the 1 and 11 cars at the front. Caudill drops out with an engine failure on lap 44.
Lap 47: Harris edges Hancock at the line to win the stage at halfway. Top 10: 42, 45, 15, 77, 2, 12, 93, 17, 10, and 5.
Lap 52: Harris leads after the field pits under the stage break.
Lap 53: Harris gets a push at the wrong time from Kunkel on the exit of turn 4 and gets turned down into Smetana and DeCosta setting off the big one. Smetana holds on but Harris and DeCosta turn up track and collect Ingram and Spencer. DeCosta spins and collects Kunkel and Hawkins before the field stacks up and collects several more drivers including Anderson, Farrell, Blanford, Hooper, Llamas, Coleman, Slates, Wichelman, Gegner, Harkleroad, and Missimer. Missimer gets hit in the door by Llamas sending the 68 flipping 9 times through the infield grass. 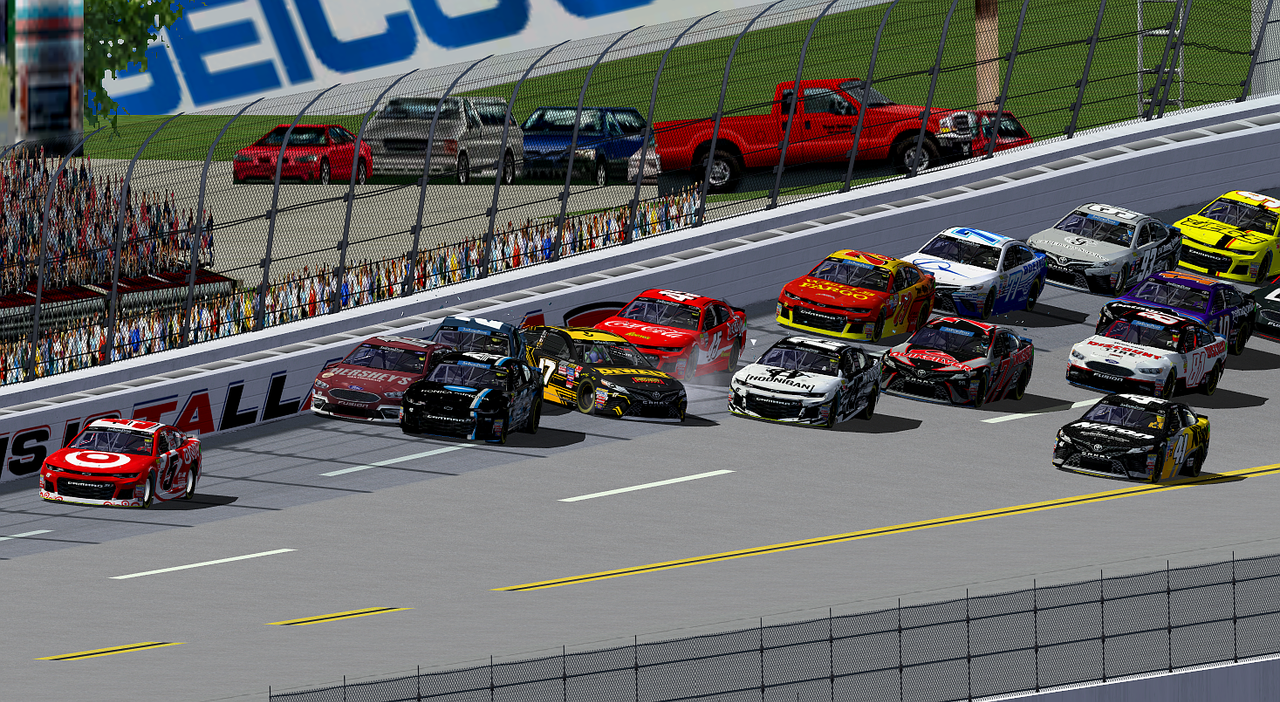 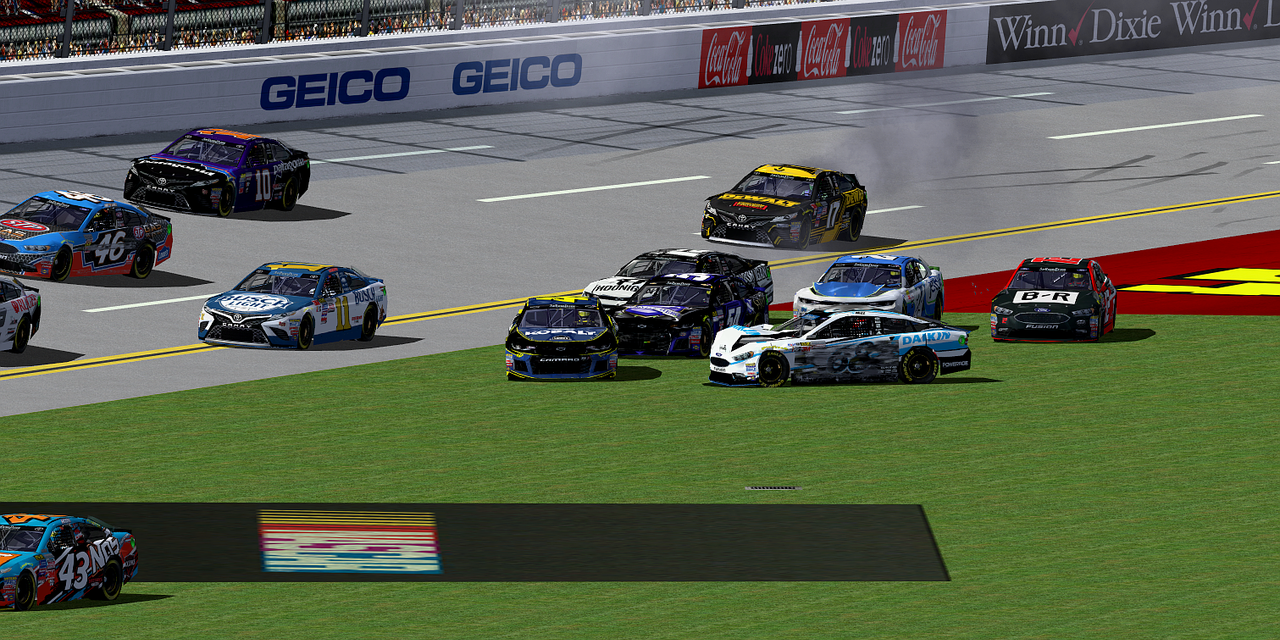 Lap 58: Woodard leads after some pit stops under the yellow. Blanford, Slates, Llamas, Kunkel, DeCosta, and Missimer all retire after the crash.
Lap 59-68: Hancock leads lap 59 before Johnston takes over and leads up to lap 68 before getting stuck behind the slower car of Root.
Lap 69-72: Craigo leads a lap before Smetana takes over out front.
Lap 73-76: Johnston takes the lead back as the field starts to begin green flag pitstops.
Lap 77-80: Smetana takes the lead back after Johnston pits.
Lap 81: Caution comes out for the 4th time as Wichelman can't slow down fast enough getting on to pit road and turns Anderson around and back up onto the track. No other cars collected. 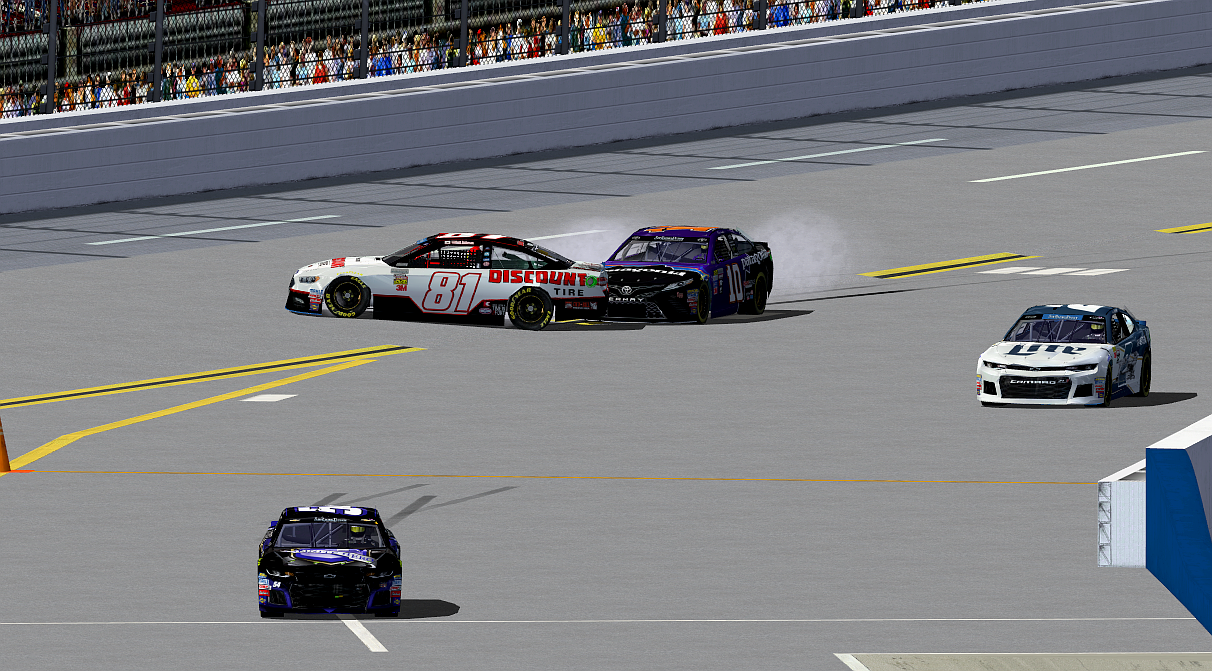 Lap 86: Smetana leads on the restart. Several drivers on the tail end after the caution came during green flag stops.
Lap 87-89: Webster, Johnston, and Mallon trade the lead as the lead lap cars work through the back markers.
Lap 90-91: Smetana retakes the lead but gives it up on the next lap to Hancock.
Lap 92: Hancock leads the remaining laps ahead of Smetana to take the win at Talladega after starting on the pole. 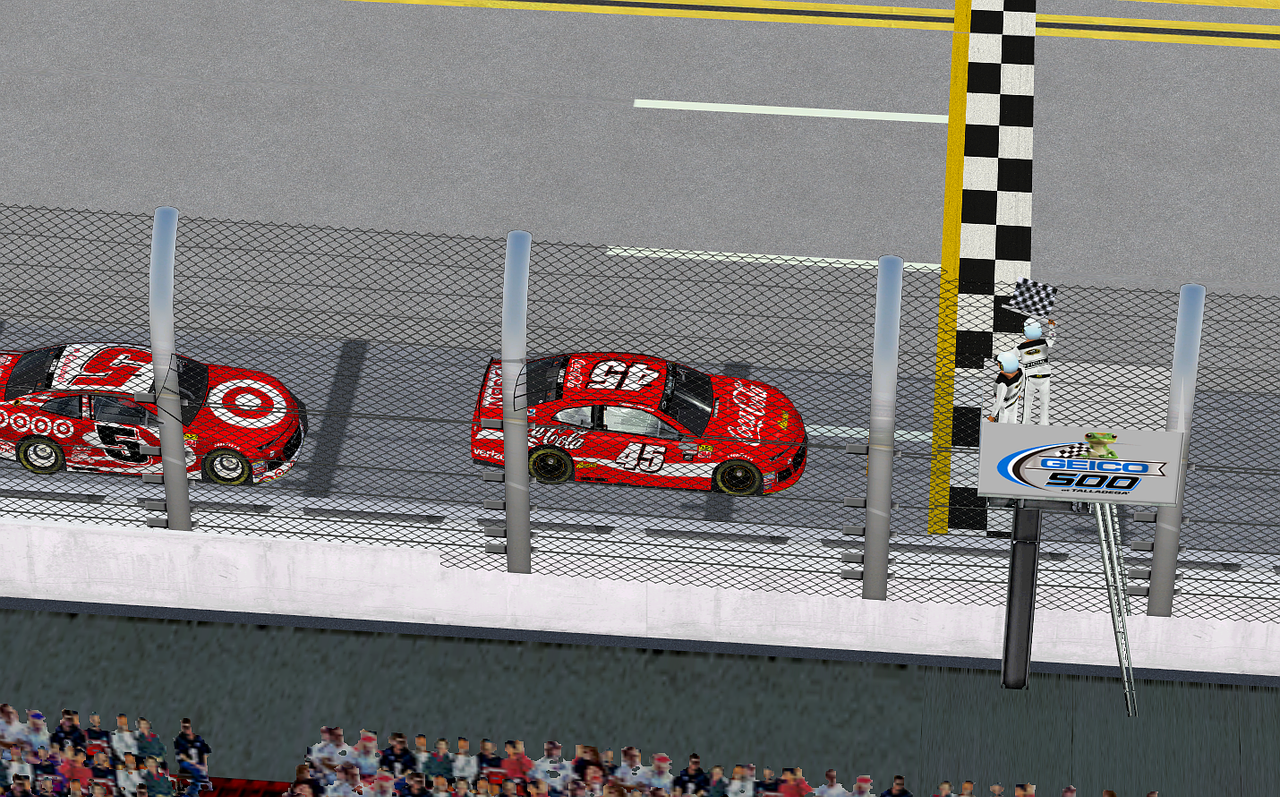 Got a fuckin top 20, hell yeah

"What a wreck fest out there today. There were some pretty stupid moves being made out there today and took out a lot of cars. Luckily for us we were in the right place at the right time and avoided all the carnage and were able to pull off a top 10. Car never really had the speed to compete all day so coming home clean and with a top 10 is just fine with me."

"At least I was able to fight for the win."

RB- Qualifying as poorly as we did we knew the engine wasn't great, but being a smaller team we couldn't afford to change it. Just unfortunate, we'll move on and see if we can't build some momentum heading into 2019. Great run by Tim today. He continues to show what a strong superspeedway driver he is.

Not the best day for us, as we got turned around by whichever hoser decided that it was a great idea to bump draft into the corner. But Brendon, man - that kid started from the pole and then won the damn race. HMS brought some really fast cars to this track and to walk out of here with Brendon's first career win, and our #42 guys being -3 behind Mallon for points lead while being 19 points above the cut-off, I'd say we are in good shape. Onto Iowa next, which is a track I've been somewhat strong at. We'll have to wait and see what kind of pace we've got.

@BrendonH12: "Somebody pinch me... Is this for real? Man... Gotta thank DJ and HMS for giving me this awesome opportunity to drive this #45 Camaro ZL1 this season. It's been a great one! Just wish we could have made the Playoffs now... But really, I don't care about that right now. We got ourselves a win! I know there'll be the doubters who say, 'Oh, it's just Talladega - anybody can win there!', but I don't care if it's 'Dega or Shake 'n Go Speedway! A win's a win and I'm so glad we were able to pull it off today - and from the pole to top it off! Gotta thank Coca-Cola for being on board this awesome week, Reese's, SBN, Verizon, and all our other partners that put so much into this effort. And look at DJ sittin' there 2nd in the points! Hopefully, he can bring home that Championship in a few weeks as we just try to go and get more wins. On to the next one..."

*Hancock is then unsuspectingly sprayed with Pepsi by DJ Harris. Hancock proceeds to knock the bottle out of his hand and force-feed him Coke.*

Damn, not the way we wanted the day to go... But I know what the hell a pinball feels like now.