Welcome to Madison, Illinois for fourth race of the 2014 SRD Indycar season, the SRD Gateway 200 at Gateway Motorsports Park, formerly known at Gateway International Raceway. Gateway is very similar to the track we were just at two weeks ago, New Hampshire, so teams will bring notes from that race here. This marks the third oval race in a row, meaning it's the halfway mark for the five week stretch of oval races to kick off the season. The SRD Gateway 200 is the third oval race of the season, and will drive very similar to New Hampshire, so expect some great racing. This is the home track of current points leader Jeremy Zumwalt, who will look to continue what looks to be a dominant season. This oval is a favorite of many of the drivers in the series, due to the unique shape and different degrees of banking in each corner. Turns one & two have characteristics similar to New Hampshire, while turns three & four are similar to Phoenix International Raceway, which we will be racing at later this season. The track is also similar to shape to NASCAR's Darlington Raceway. In 2012, John Hooper, Sr. help off strong charges from Adam Tander and Daniel Asher to win. Gateway tends to be a very clean race, so track position and qualifying will be key, as you might not get a caution to help you.

Last weekend, JJ Jordan made some history of his own by becoming the second driver to win at an oval and road course configuration, joining Kyle Missimer, as he pulled off the upset win at Michigan. A few road course guys got their seasons back on track...while some's seasons continued to fall apart...last week, but the big stories out of the event were the wreck caused by Josh Hawkins and the penalties that came because of it, and the disqualification of Daniel Asher. Hawkins suffered a 20 point penalty following his boneheaded move, where he cut across the track to pit and caused a 4 car wreck that resulted in Jacob Craigo flying into the catchfence. Hawkins was also placed on probation until the end of the season, and it's unsure if he'll suffer any punishment from his team, Cole Motorsports. SRD Indycar also released an explaination on Daniel Asher's disqualification last weekend, saying it was "a scoring glitch in the system, which stopped scoring him and then resulted in a disqualification for staying on track." SRD Officals send their apologies to the Asher-Honda Autosport team. 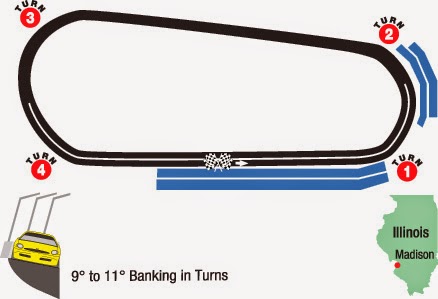 We will be using the Firestone Firehawk tires this week. The Big Three:
1. JJ Jordan notches career win #2, becoming the second driver to win on a road course and an oval.
2. Josh Hawkins penalized for on track actions at Michigan, docked 20 points and placed on probation.
3. Jeremy Zumwalt opens up a commanding 37 point lead in the points.

Points Standings:
*DOES NOT INCLUDE JOSH HAWKINS 20 POINT PENALTY*

@RCole25 - "Looking forward to Gateway. One of my favorite tracks."

Craigo - "Yeah, I'm alright. But the wreck last weekend at Michigan could've been worse and Hawkins better be glad it wasn't. However, with as much pain as it is to race right now, I'm going to only be able to do first and second practice as well as qualifying. We have Tim Johnston as a back up driver on standby in case I need to get out of the car on Sunday, and he'll run third practice."

Just Be Yourself Dont Care What Other Thinks!

Joe Towianski- "Glad to see Hawkins get that penalty after last week. He is a **expletive**. I hope I never have to see that kind of driving or wreck ever again. Glad that we are still on ovals and hopefully we can make some of those points up after last week."

@CLlamas48 - "Not looking forward to a non-drafting type oval like New Hampshire. I don't expect to do much this weekend like the New Hampshire race. I will have to say that I had this same thought about last week but we will see when the practices start.. #SRDGateway200 #SRDIndycars "

@PVRacing - "Can't wait to get started at Gateway! After our lucky finish last week I hope we still have some luck left. #hereshoping #rookieseason"

Zoom - "Pressures on to win this one. For me it would be as big as a win in Indy. We haven't had track time yet but after our win at New Hampshire I think this Target Ford will be really strong this weekend and hopefully everything lines up and we manage to pull into victory lane at the end of the weekend."

Well, we've done well here in the past. We've had a sort of rough start to the season. We need a good run here at Gateway.

"That week was last week. Things happen, it can't be changed now. Technology isn't perfect, and it bit my team in the ass last week. But this is this week, and we're at a track we almost won at last year. We brought the car we raced at New Hampshire, so I'm looking forward to this race. We NEED a good run to get this season back on track."

@Mahoney74INDY: Only one way to go in the standings. Love coming to Gateway...great track. While we're in STL, i think i'll hit up the Budweiser brewery!

Curtis J™ - "Love Gateway and it only adds fuel to the fire when we look at our position in the standings, im super excited and ready to continue the good season we are having sans Michigan. I texted Mahoney about going to get some Buds because he was talking about it during post race press last week but I guess he already left XD"

JordanDemis: Another oval... well see. The cars not been so good on these tracks at all, maybe luck will be on my side, or Oppenheimer might find himself in a wall, out of a race this time around, both would be equally gratifying.

(OOC No hate for him at all in real life)

Opening practice for the SRD Gateway 200 was held this afternoon. Speeds were close throughout the whole field, and lap times were close also, the closest the whole field has been all season. Two incidents happened on track, both of them blown motors, both of them from the Asher-Honda Autosport club. Daniel Asher's engine went up in smoke 25 minutes into practice, and he didn't return to the track. Zack Webster's engine suffered the same fate with 10 minutes left to go in the session.

Sean English lead most of the session, but with 2 minutes left Kyle Slaughter put up the fastest lap of the session with a 29.241, beating out English's 29.245. Brendan Gorman, Jason Blanford, and Jeremy Zumwalt rounded out the top 5. Despite being one of the most balanced drivers in the field, Brendan Gorman has been very fast at every track this season so far, and Jason Blanford is making a statement in that 58 car as a rookie. He's been up there ever oval race so far. And of course, don't count out hometown hero Jeremy Zumwalt.

"As a driver and team owner, I'm not thrilled one bit about our team's engine woes in practice. Apparently Zack and I had the same exact issue, which I'm not going to bring up, but we're going to change out these engines, and also check over Jackson's engine and possible change that also just as a precaution, hopefully we can get back out there for the next practice session. But this is not the start to the weekend we wanted at all."

Not thrilled with the car. The car was tight in and wouldn't roll through the corner. We worked on it and it didn't get better. We've got a long way to go.

RC - "This car is pretty bad for this track. We need a big turnaround before the next practice."

...And Justice For All

"Starting up front is paramount here. That said, we're still working on getting the car tuned up right. Always in the middle of the pack so far."

Slaughter: "Okay, I take back what I said in Race 1... I love my ride/equipment! This thing is bad fast! P1 in First Practice means this is gonna be a great weekend... possibly a win in my future. I've come close already this season. Won in SRD Nationwide and SRD Cup, now I'm looking to become the first with wins in all 3 series. Could be done sooner than you think.

(I think that hasn't been done, no idea really!)